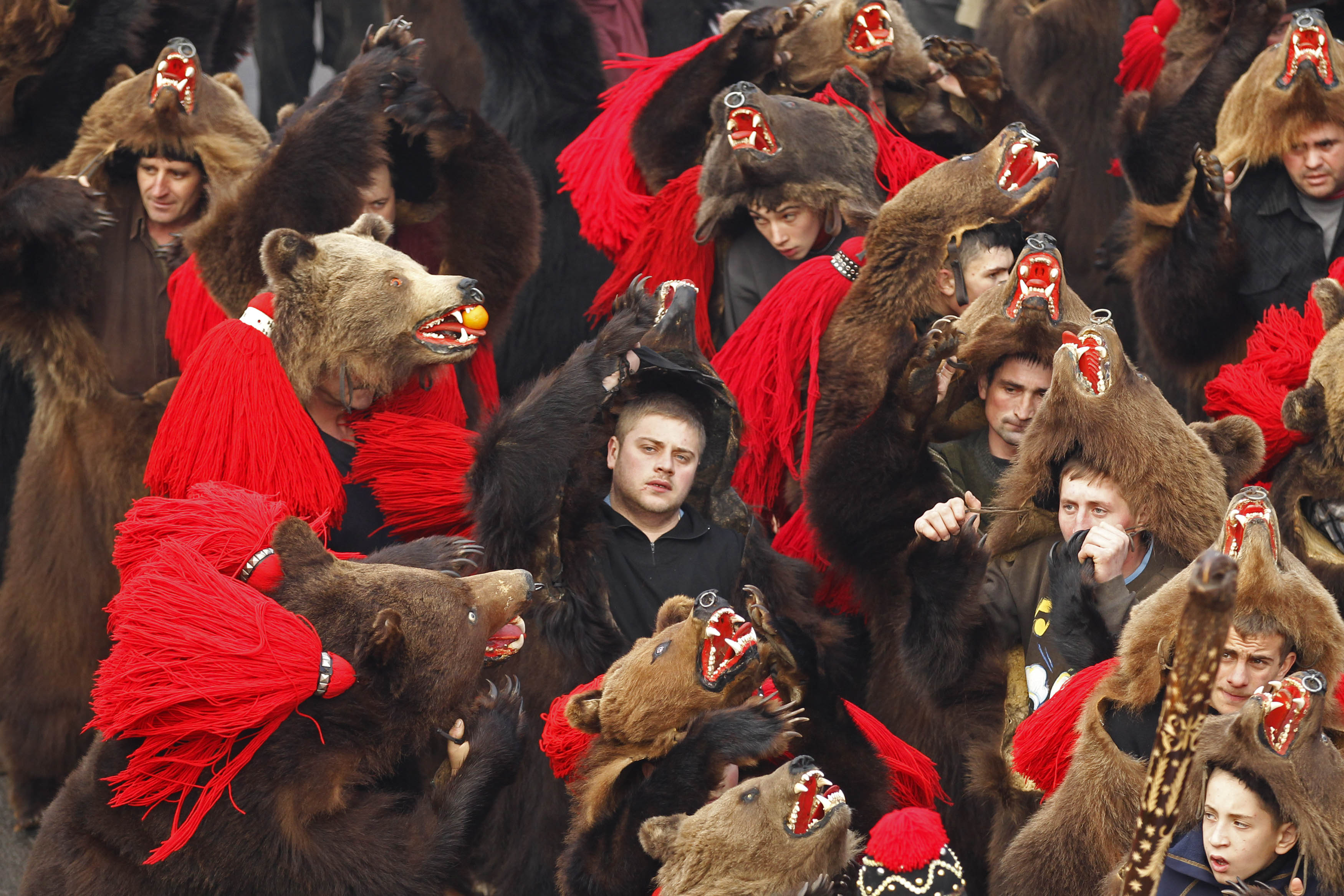 While New Year's Eve is synonymous with fireworks, ball drops and "Auld Lang Syne," some more obscure traditions will be celebrated around the world:

Romanians usher in the new year by wearing brightly colored costumes or animal furs to ward off evil. This year was no different as Romanian dancers performed the "bear" dance, a ritual for good luck in the New Year, during a traditional parade in Comanesti. In pre-Christian rural traditions, dancers used to tour from house to house in villages while singing and dancing to ward off evil.

Every Dec. 31 in Brasstown, N.C. a possum is captured and lowered in a cage to ring in the New Year, aka the "Possum Drop." This year's unusual tradition was in jeopardy after a PETA lawyer argued in court that the lights, noise and crowd of people can wreck a possum's nerves and health. However, a judge ruled Monday that the annual New Year's Eve show can go on.

He draws smaller crowds than the ball in Times Square does, but Mr. Pickle is a New Year's Eve star in his own right. Each year, thousands of people gather in Dillsburg, Pa. to watch the lighted 3-foot-tall, papier-mache pickle drop from a 45-foot flagpole into - you guessed it - a pickle tank to mark the start of the new year.

On New Year's Eve, Germans enjoy their mulled red wine and their fireworks – but they also like their melted pieces of lead. According to germany.info, some citizens ring in the new year with BleigieBen, or lead pouring. Here's how it works: You melt a small amount of lead and after pouring the molten metal into cold water, the metal hardens and forms a shape. A special BleigieBen book will tell you what the shape signifies for the new year.

In Atlanta, an 800-pound fiberglass peach is dropped from the top of a 138-foot tower of lights in what has been billed as the Southeast's largest New Year's Eve celebration. The celebration, staged by Underground Atlanta, is a 16-hour affair, starting at noon with children's activities and culminating with fireworks after the peach drop.

The carp drop in Prairie du Chien, Wis., attracts people from afar, creating business for motels and shops. The carp is a real - but dead - fish weighing between 25 and 30 pounds and caught locally. It's frozen, then partially thawed and prepared for the big day. Nicknamed "Lucky," the carp is lowered onto a throne as the new year arrives. Fireworks follow, courtesy of the Chamber of Commerce.

In Spain, revelers clutch a dozen green grapes and when the clock strikes midnight, they eat one grape for each bell toll (each chime not only symbolizes the hour, but also each month of the year). Eat all 12 by the clock's last toll and you will have good luck for the rest of the year. The century-old tradition – called las doce uvas de la suerte – has an even stranger twist: While eating the grapes, you must wear red underwear.