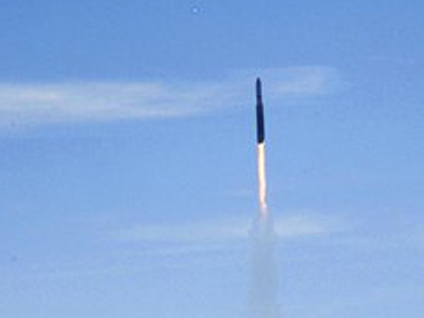 An unmanned 235-foot-tall Delta 4-Heavy rocket blasted off from Vandenberg Air Force Base Thursday afternoon with a secret satellite on a mission for the U.S. National Reconnaissance Office. (The NRO operates satellites that provide information to the Central Intelligence Agency and Department of Defense.)

The military isn't saying more about the satellite - known only as NROL - but the launch constituted the use of the most powerful rocket in America's space arsenal to ever lift off from the west coast. Jeffrey Richelson, an expert on space reconnaissance with the National Security Archive, told CNN that he believed the mission was designed to generate "high-resolution imagery of military and terrorist facilities around the world."

Prior to the liftoff Air Force launch director Lt. Col. Brady Hauboldt described the event as a "significant milestone in our nation's space capability. We've really restored a national capability for heavy lift on the Western Range, something we have not had since the last of the Titan 4Bs flew out of Vandenberg. This extends our ability to cost effectively deliver payloads of all sizes and compliments."

The Delta 4-Heavy rocket can carry payloads of up to 24 tons into low-Earth orbit. The current crop of medium-to-heavy launch Delta vehicles became operational in 2002. They are produced by a joint business operated by Boeing and Lockheed Martin called the United Launch Alliance.