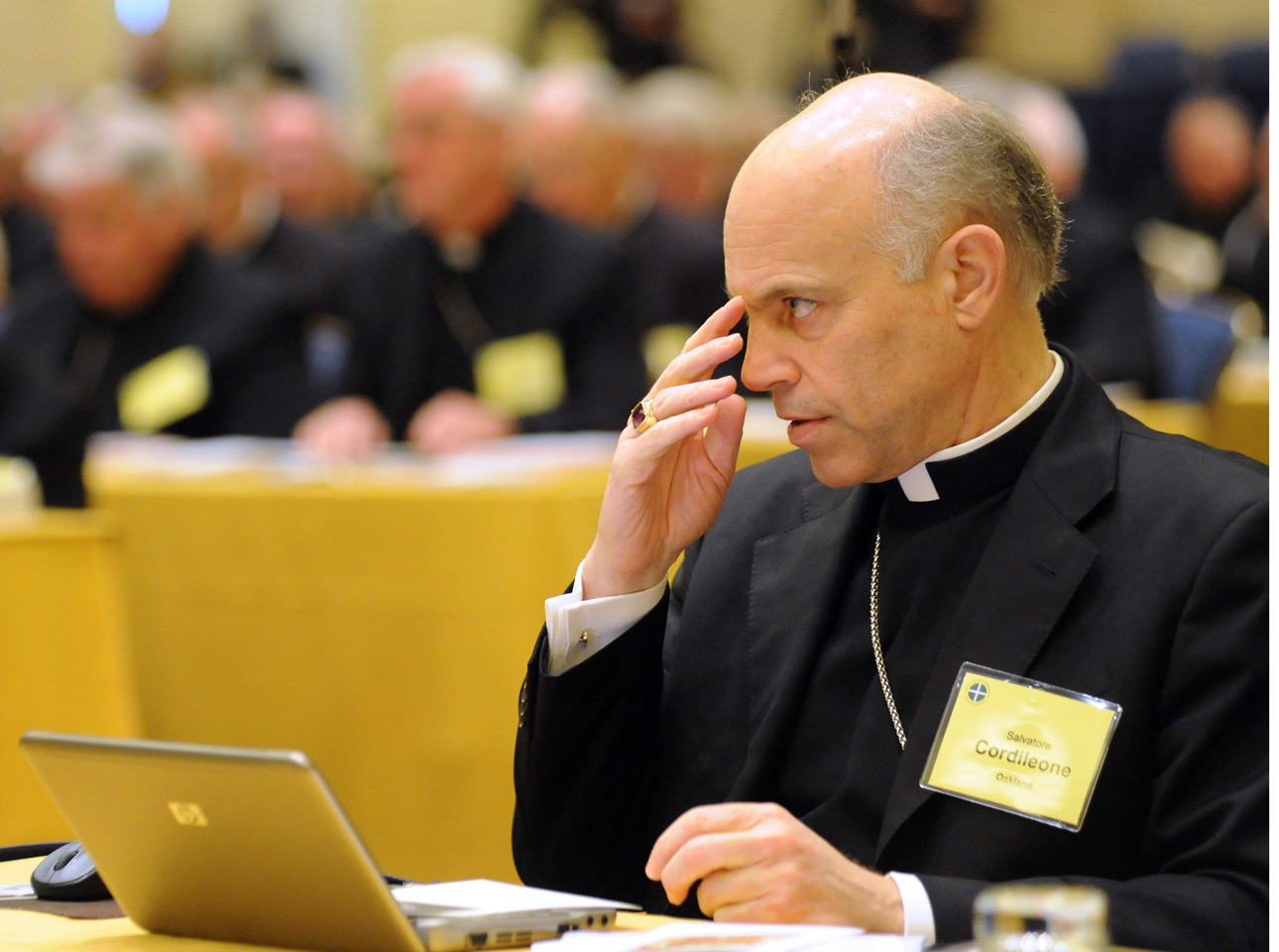 SAN FRANCISCO The installation of a new Roman Catholic archbishop of San Francisco - a backer of California's same-sex marriage ban - is drawing support and concern as the 56-year-old priest assumes the ceremonial seat at St. Mary's Cathedral during a Mass Thursday.

Such inductions have not historically been cause for much interest or angst in San Francisco, where the population of church faithful is smaller than in many major U.S. cities. But attention is intense this time, and gay rights demonstrators have said they hope to get their voices heard amid Thursday's heavy security.

Salvatore Joseph Cordileone, a native Californian who served as bishop of neighboring Oakland for the last three-and-a-half years, has a nationwide reputation as a fierce defender of the Catholic Church's positions on homosexuality in general and same-sex marriage in particular.

His stance, a key factor in his rapid, decade-long ascension from auxiliary bishop to archbishop, has endeared him to fellow Catholic conservatives who have long regarded the San Francisco Bay area's gay-friendly parishes as wayward sheep in the flock.

More liberal Catholics and other faith communities that welcome gay, lesbian and transgender members, however, are worried about that part of Cordileone's resume, reflected in his experience as one of the early engineers of California's voter-approved ban on same-sex marriage in 2008, and since 2011 as chairman of the U.S. Conference of Catholic Bishops' subcommittee charged with opposing efforts to legalize gay unions.

Those concerns prompted Marc Andrus, the Episcopal bishop of California, this week to write an open letter to his parishioners stating that while he planned to attend Thursday's ceremony and to work with the new archbishop on issues such as immigration reform, he would also welcome into the Episcopal fold Catholics who "may find themselves less at home with Salvatore Cordileone's installation."

Andrus wrote, "It is our Christian duty to take stands in public or from our pulpits when others - especially those of our own faith - are in error and trying to suppress the rights of others who, too, have been created in God's image."

San Francisco Supervisor Christina Olague, who is bisexual and was raised Catholic, criticized Cordileone at this week's meeting of the city's Board of Supervisors.

"It is disappointing that the church has assigned a person here who has shown a great deal of intolerance for our community and was instrumental in the creation of Proposition 8," Olague said, according to CBS San Francisco. The amendment to California's constitution that outlawed gay marriage was struck down by a federal appeals court. "He has also made comments that Catholic practitioners from the queer community abstain from Holy Communion."

Supervisor David Campos, a gay Catholic, was less critical, saying, "San Francisco has always been a very welcoming place and it is in that spirit that we extend an invitation to the archbishop to work with every member of the Catholic community."

Pope Benedict XVI's selection of Cordileone on July 27 to replace retiring Archbishop George Niederauer also has raised eyebrows outside of California, despite Benedict's track record of elevating U.S. prelates who are unafraid to clash with politicians on issues such as contraception, said Rocco Palmo, a respected church commentator and blogger based in Philadelphia.

"The most salient thing I can tell you is that the American bishops and archbishops I spoke with in the wake of the appointment, not seen widely as a progressive group, were stunned," Palmo said. "It was seen as a provocative gesture by Rome" to name a "combative" traditionalist like Cordileone to oversee the nation's gay capital.

Opposition to same sex marriage has emerged as a principal theme of Pope Benedict XVI's papacy. In March, he urged visiting U.S. bishops to beef up their teaching about the evils of premarital sex and cohabitation, and denounced what he called the "powerful" gay marriage lobby in America.

The pope acknowledged his comments might sound anachronistic or "countercultural," particularly to the young. But he told bishops to not back down in the face of "powerful political and cultural currents seeking to alter the legal definition of marriage."

For his part, Cordileone has said he wants to be seen as more than a one-issue man and looks forward to getting to know the 91 parishes in an archdiocese that also includes the two counties to the north and south of San Francisco. He has not back-pedaled, though, on previous statements calling efforts to extend marriage beyond one man and one woman "the ultimate attack of the Evil One" and declaring that Catholics who support same-sex marriage should refrain from taking communion.

After taking the archbishop's seat at Thursday's three-hour afternoon induction Mass, Cordileone is expected to give a homily before an audience of 2,000 people that will include the Vatican's ambassador to the U.S. and other high-ranking church officials.

Cordileone was arrested in San Diego in late August on a misdemeanor charge of driving under the influence. He has said he was drinking wine with friends and apologized for the lapse in judgment. He is scheduled to appear in court on the charge on Tuesday.