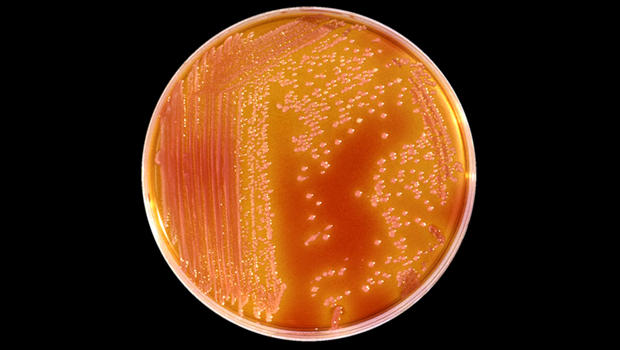 There may be some good news for the 700,000 Americans who suffer from Crohn’s disease – a debilitating condition of chronic inflammation of the gastrointestinal tract.

New research from the Case Western Reserve University School of Medicine offers clues into the cause of the disease, which experts say could someday lead to new treatments and perhaps ultimately a cure.

People with Crohn’s disease experience symptoms of severe abdominal pain, persistent diarrhea, weight loss, and fatigue. There is currently no cure for the condition, which can sometimes cause life-threatening complications.

While the underlying cause of Crohn’s disease is unknown, it is likely due to a number of factors, including genetics and a malfunctioning immune system. Previous research has shown that certain bacteria may also be linked to the disease.

Now, a new study published in the journal mBio suggests fungi may also play a role.

“Most of the studies that have looked at this disease looked at bacteria only,” the study’s senior author, Mahmoud A. Ghannoum, PhD, professor and director of the Center for Medical Mycology at Case Western Reserve and University Hospitals Cleveland Medical Center, told CBS News. “We looked at both bacteria and fungi because it is very well known that these organisms both live in our body and definitely interact with one another. So to look at bacteria alone, we didn’t really have the full story.”

This is the first time the bacteria Serratia marcescens and any type of fungus have been linked to Crohn’s disease in humans.

Additionally, the researchers found in test-tube research that these specific microorganisms work together to produce a biofilm (a thin, slimy layer of microorganisms that adheres to the intestines, among other parts of the body) that can lead to inflammation, which causes the symptoms of Crohn’s disease.

This shows that “these organisms have evolved together so that they can operate to protect each other and at the same time cause problems to the host, or the patient,” Ghannoum said.

Finally, the study showed that the sick patients had significantly lower numbers of beneficial bacteria in their guts than the healthy participants.

“Among hundreds of bacterial and fungal species inhabiting the intestines, it is telling that the three we identified were so highly correlated in Crohn’s patients,” Ghannoum said in a statement. “Furthermore, we found strong similarities in what may be called the ‘gut profiles’ of the Crohn’s-affected families, which were strikingly different from the Crohn’s-free families.”

Still, experts say the findings could one day lead to potential new treatments, such as probiotics​.

“We also looked at healthy people and found what are the good bugs, or microorganisms, that keep the balance,” Ghannoum said. “So now we want to see if we can use some of these good bugs to control the bad ones.”

Understanding the underlying mechanisms that make the so-called “bad” microorganisms work together could also lead to the development of a drug to disrupt the connection, he said.

Dr. Arun Swaminath, director of the inflammatory bowel disease program at Lenox Hill Hospital in New York City, said that the study also opens questions over whether targeting antibiotic regimens to Crohn’s patients with high levels of E. coli and Serratia marcescens would be effective, or perhaps introducing antifungal medication as treatment.

Swaminath, who was not involved in the study, called the findings “exciting” and said that the study “moves our knowledge base a bit farther.”

However, he notes that the research needs to be repeated in more populations – and in a greater number of people – to better understand the bacterial and fungal role in Crohn’s disease before changes in treatments could be made.

Ghannoum said he plans to continue the research and is hopeful that he and his team will be able to move forward in developing new treatments for Crohn’s disease​.

“I think that within five years, with a bit of luck, we’ll be able to move into what’s called translational research,” he said, “which means you take your research findings and start working to develop a drug or probiotic.”

Surgeon General on how U.S. can "get to a better place" with COVID
Ashley Welch