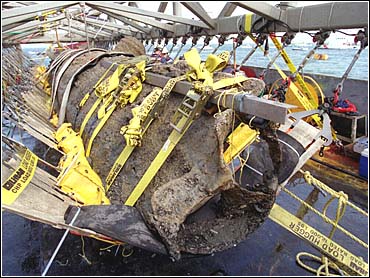 Scientists excavating the Confederate submarine Hunley said Friday they have located more human remains thought to be from a crew member of the first submarine in history to sink an enemy warship.

More ribs and part of the backbone were found near where they found rib bones earlier this week. All the remains found so far are thought to be from the same person, project director Bob Neyland said.

Scientists also discovered a button with an anchor on it, indicating the crewman was a Confederate seaman, said state Sen. Glenn McConnell, chairman of the South Carolina Hunley Commission. Two buttons found earlier came from an artilleryman's jacket.

The remains were found high in the front of the sub and were supported by something, perhaps control equipment or a stool, Neyland said.

Any remains uncovered during the excavation will be buried in Charleston's Magnolia Cemetery near where other crew members who died during testing of the sub were laid to rest, McConnell said. Before that, however, scientists hope to use the bones to reconstruct what the crew members looked like.

The Hunley sank with its nine-man crew on Feb. 17, 1864, shortly after blowing up the Union ship Housatonic. However, it never returned to port and how it sank has remained a mystery that researchers hope to solve.

The submarine was discovered in May, 1995, lying under 28 feet of water on the floor of the Atlantic Ocean about four miles off the South Carolina coast. It was raised last August and brought to a conservation lab at the former Charleston Navy Base.

On Thursday, scientists uncovered what appeared to be reduction gears connected to a hand pump or to the hand crank used to power the sub.

They have decided not to remove a fourth semicircular hull plate for better access to the crew compartment because the plate is attached to equipment linked to the submarine's snorkel box, Neyland said.

©MMI Viacom Internet Services Inc. All Rights Reserved. This material may not be published, broadcast, rewritten, or redistributed. The Associated Press and Reuters Limited contributed to this repor