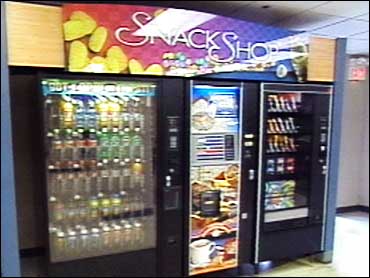 As schools turn to vending machines to ease budget gaps, a health advocacy group wants them to fill the machines with healthier choices.

The Center for Science in the Public Interest says school vending machines are usually filled with fatty foods and sodas -- which add to the child obesity problem. The U.S. government says 13 percent of children are overweight. One quarter of children ages five to ten show early warning signs for heart disease such as elevated blood cholesterol or high blood pressure.

The CSPI's nutrition policy director says schools that have made the switch prove it's not true that kids will only eat junk -- they just need to be offered healthier choices.

Health advocates want Congress to increase government oversight of foods sold outside the lunch line including vending machines, snack bars, fundraisers and school stores. In the meantime, the CSPI says each community can set its own nutritional standards.

Guidelines for improving school foods and beverages include: