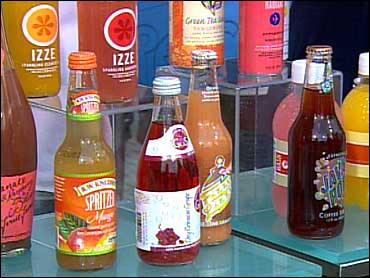 Coca-Cola and PepsiCo are set to launch the first diet drinks sweetened with stevia that have the FDA's blessing -- or at least, its lack of objections.

Stevia is a shrub native to South America. Until recently, the FDA only allowed sweeteners made from stevia to be sold as dietary supplements, not as food additives.

Truvia was created by Coca-Cola and Cargill. Coca-Cola's first Truvia-sweetened drink is Sprite Green, a reduced-calorie soft drink that will debut in two U.S. cities this month and become more widely available in 2009, according to a Coca-Cola news release that doesn't name the two cities.

In the news release, Coca-Cola says it plans "many" other Truvia-sweetened beverages in the future, including low-calorie and zero-calorie drinks.

The SoBe drinks are coming "soon" and Trop50 will launch in March, PepsiCo and Whole Earth Sweetener Company state in a joint news release.

The Center for Science in the Public Interest (CSPI) issued a news release that says, "Shame on the Food and Drug Administration" for its decision on rebaudioside A, the stevia extract in Truvia and PureVia. The CSPI calls for further safety tests of rebaudioside A.

"It is far too soon to allow this substance in the diet sodas and juice drinks consumed by millions of people," said CSPI Executive Director Michael F. Jacobson, who calls for the FDA's decision to be reversed.
By Miranda Hitti
Reviewed by Louise Chang
©2005-2008 WebMD, LLC. All rights reserved