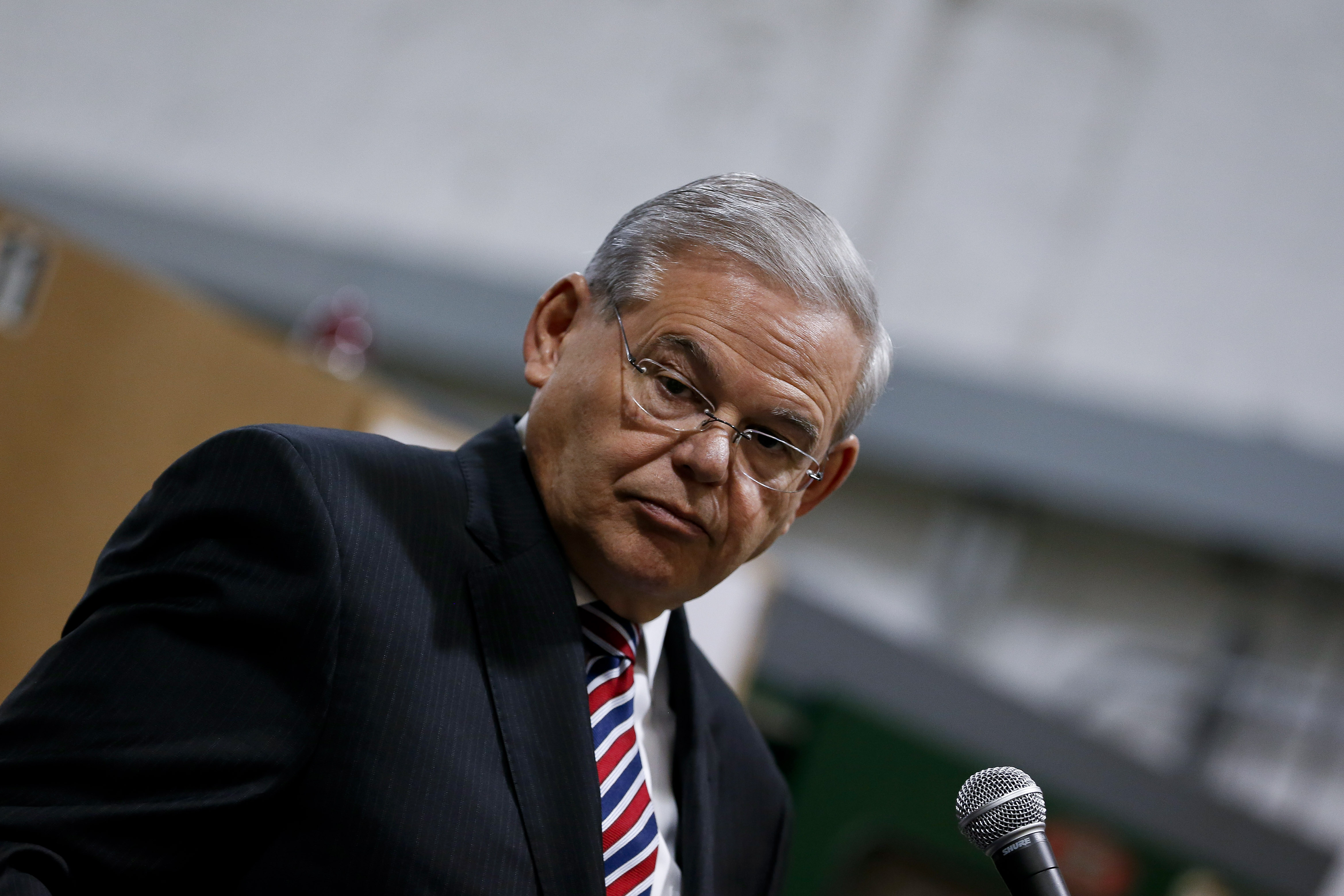 The Justice Department formally handed down an indictment for New Jersey Sen. Bob Menendez on Wednesday, alleging that the Democrat used his Senate office to promote the interests of friend and Democratic donor Dr. Salomon Melgen.

Menendez, 61, of Union City, New Jersey, and Melgen, 61, of West Palm Beach, Florida, were indicted in the District of New Jersey for one count of conspiracy, one count of violating the travel act, eight counts of bribery and three counts of honest services fraud. Menendez was also charged with one count of making false statements. The case is being handled by the Justice Department's Public Integrity Section.

"Between January 2006 and January 2013, Menendez accepted close to $1 million worth of lavish gifts and campaign contributions from Melgen in exchange for using the power of his Senate office to influence the outcome of ongoing contractual and Medicare billing disputes worth tens of millions of dollars to Melgen and to support the visa applications of several of Melgen's girlfriends," the Justice Department explained in a statement."

Those gifts included "flights on Melgen's private jet, a first-class commercial flight and a flight on a chartered jet; numerous vacations at Melgen's Caribbean villa in the Dominican Republic and at a hotel room in Paris; and $40,000 in contributions to his legal defense fund and over $750,000 in campaign contributions," according to the statement. "Menendez never disclosed any of the reportable gifts that he received from Melgen on his financial disclosure forms."

Investigators have been looking into the relationship between the two men for several years, but the senator has maintained his innocence throughout, previously deriding the investigation as a politically-motivated "smear campaign."

Wednesday night, Menendez told supporters he was "angry and ready to fight" the charges.

"Let me be very clear, I have always conducted myself appropriately and in accordance with the law," Menendez said during a press conference earlier this month after Attorney General Eric Holder approved prosecutors' request to move forward with the charges. "Every action that I and my office have taken for the last 23 years that I have been privileged to be in the United States Congress has been based on pursuing the best policies for the people of New Jersey and this entire country."

But with the indictment official, he does plan to voluntarily and temporarily step aside from his post as ranking member on the Senate Foreign Relations Committee, a source familiar with the decision told CBS News.

The National Republican Senatorial Committee (NRSC) blasted Menendez in the wake of the indictment.

"Senator Menendez's ethics lapses have long been a distraction to the United States Senate. With today's indictment, the FBI and the Justice Department made it clear that Senator Menendez has betrayed the trust of New Jersey families," said NRSC spokeswoman Andrea Bozek in a statement. "His actions reinforce all that the American people believe is wrong with Washington Democrats and closes the book on a Senate Democrat majority that put their personal interests ahead of the American people."

Menendez's fellow New Jersey senator, Cory Booker, offered some kind words for his embattled colleague in his own statement.

"Senator Menendez has never wavered in his commitment to the people of New Jersey," Booker said. "He's been an invaluable resource and a mentor to me since I arrived in the Senate. Our system of justice is designed to be fair and impartial, and it presumes innocence before guilt. I won't waver in my commitment to stand alongside my senior Senator to serve our great state."

The relationship between Menendez and Melgen first came under scrutiny when the FBI received a tip that the senator had solicited underage prostitutes during a trip to the Dominican Republican that he took on Melgen's private jet in 2010. That accusation soon fell apart after the women withdrew their accusations.

Investigators continued probing the ties between Menendez and Melgen, however, examining a series of trips that Menendez took on Melgen's private jet in 2010. In 2013, Menendez reimbursed Melgen for the free airfare, calling his earlier failure to do so an "oversight."

Authorities have also examined whether Menendez improperly pressured the Centers for Medicare and Medicaid Services (CMS) to change its reimbursement formula in a way that would benefit Melgen. The doctor had been accused of overbilling Medicare by $8.9 million, and the FBI raided his office in 2013. Melgen insisted he'd simply been confused by what was allowed under the complex payment formula.

Menendez acknowledged that he'd raised concerns with CMS about the payment formula, but he denied any accusation that he'd improperly intervened in the standoff between the doctor and the government. "The bottom line is, we raised concerns with CMS over policy and over ambiguities that are difficult for medical providers to understand and to seek a clarification," Menendez said.

The Department of Justice's statement alluded to the CMS billing issue and several other incidents in which Menendez allegedly used his office to benefit Melgen.

"First, Menendez allegedly pressured executive agencies in connection with a conflict between Melgen and the government of the Dominican Republic relating to a disputed contract that Melgen purchased to provide exclusive screening of containers coming through Dominican ports," the statement explained. "Second, Menendez allegedly advocated on behalf of Melgen in connection with a Medicare billing dispute worth approximately $8.9 million to Melgen. Third, Menendez allegedly took active steps to support the tourist and student visa applications of three of Melgen's girlfriends, as well as the visa application of the younger sister of one of Melgen's girlfriends."

"Throughout these efforts, Menendez allegedly engaged in advocacy for Melgen all the way up to the highest levels of the U.S. government, including meeting with a U.S. cabinet secretary, contacting a U.S. Ambassador, meeting with the heads of executive agencies and other senior executive officials and soliciting other U.S. Senators, all in order to assist Melgen's personal and pecuniary interests," the statement added.