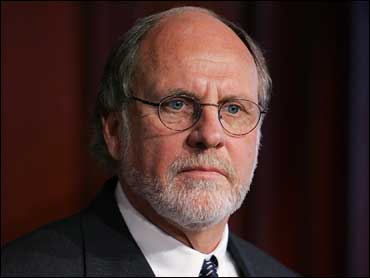 The bill, approved last week by the state Assembly and Senate, replaces the death sentence with life in prison without parole.

"This is a day of progress for us and for the millions of people across our nation and around the globe who reject the death penalty as a moral or practical response to the grievous, even heinous, crime of murder," Corzine said.

The measure spares eight men on the state's death row. On Sunday, Corzine signed orders commuting the sentences of those eight to life in prison without parole.

Among the eight spared is Jesse Timmendequas, a sex offender who murdered 7-year-old Megan Kanka in 1994. The case inspired Megan's Law, which requires law enforcement agencies to notify the public about convicted sex offenders living in their communities.

New Jersey reinstated the death penalty in 1982 - six years after the U.S. Supreme Court allowed states to resume executions - but it hasn't executed anyone since 1963.

The state's move is being hailed across the world as a historic victory against capital punishment. Rome plans to shine golden light on the Colosseum in support. Once the arena for deadly gladiator combat and executions, the Colosseum is now a symbol of the fight against the death penalty.

Since 1999, the first century monument Colosseum has been bathed in golden light every time a death sentence is commuted or a country abolishes capital punishment.

"The rest of America, and for that matter the entire world, is watching what we are doing here today," said Assemblyman Wilfredo Caraballo, a Democrat.

The bill passed the Legislature largely along party lines, with controlling Democrats supporting the abolition and minority Republicans opposed. Republicans sought to retain the death penalty for those who murder law enforcement officials, rape and murder children, and terrorists, but Democrats rejected that.

"Sparing the lives of brutal murderers only a week before Christmas will leave a hole in the hearts of surviving family members that will never heal," said Assembly Minority Leader Alex DeCroce, R-Morris.

"Just another slap in the face to the victims," Kanka said.

Members of victims' families fought against the law.

"I will never forget how I've been abused by a state and a governor that was supposed to protect the innocent and enforce the laws," said Marilyn Flax, whose husband Irving was abducted and murdered in 1989 by death row inmate John Martini Sr.

New Jersey's Public Defender's Office, which represents all eight men, questioned whether Corzine had authority to commute death sentences to life in prison without parole.

"We have to discuss the implications of commuting a sentence to a sentence that did not exist at the time they were sentenced," said Tom Rosenthal, spokesman for Public Defender Yvonne Smith Segars.

But Rosenthal said none of the eight men are likely to get paroled should their former sentences stand. David Cooper, 37, would be the youngest before he was eligible for parole at age 78, assuming he was released at his first parole hearing.

The last states to eliminate the death penalty were Iowa and West Virginia in 1965, according to the National Coalition to Abolish the Death Penalty.

"Justice should have been served," said Sharon Hazard-Johnson, whose parents were killed in their Pleasantville home in 2001 by death row inmate Brian Wakefield. "I think we all know that justice has not been served."

Other states have considered abolishing the death penalty recently, but none has advanced as far as New Jersey.

The death penalty is on hold nationwide, reports CBS News correspondent Bob Orr. There have been no executions since September, and none is expected until the Supreme Court decides some time next year if lethal injection amounts to a cruel and unusual punishment.

"The word will travel around the globe that there is a state in the United States of America that was the first to show that life is stronger than death, that love is greater than hatred, and compassion and standing for the dignity of the human person is stronger than the need for revenge," said Sister Helen Prejean, the Roman Catholic nun who wrote "Dead Man Walking."

According to the Washington-based Death Penalty Information Center, 37 states have the death penalty.

States with the death penalty:

States without the death penalty:

Bills to abolish the death penalty were recently approved by a Colorado House committee, the Montana Senate and the New Mexico House. But none of those bills has advanced.

The nation's last execution was Sept. 25 in Texas. Since then, executions have been delayed pending a U.S. Supreme Court decision on whether execution through lethal injection violates the constitutional ban on cruel and unusual punishment.