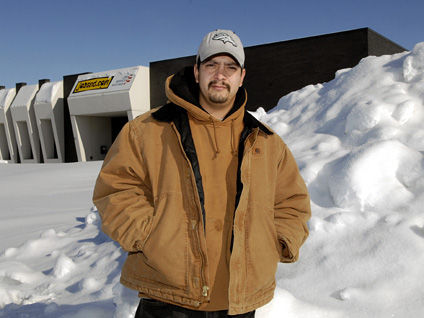 An Arab television station showed two photographs of men who appeared to be U.S. soldiers smiling and flashing a thumbs up as they posed next to a corpse in a body bag, saying in Thursday's broadcast that they were new pictures of abuse at Abu Ghraib prison.

Al-Arabiya said the photos "surfaced during the investigation" and did not say how it obtained them. A day earlier, a U.S. senator had disclosed in Washington that the U.S. Defense Department had found a disk containing photos of abuse at Abu Ghraib.

The photographs broadcast by Al-Arabiya were not as graphic as widely seen images of U.S. soldiers sexually humiliating and otherwise abusing prisoners at Abu Ghraib.

But the new photographs, particularly because they could be portrayed as showing Americans gloating over the death of an Arab, nonetheless were likely to spark more condemnation of the United States by Arabs already outraged by the prison abuse scandal and, more generally, by what they see as Washington's anti-Arab policies in the Middle East.

In the first court-martial linked to the case, Spc. Jeremy C. Sivits pleaded guilty Wednesday to four counts of abuse of Iraqis and was sentenced to the maximum penalty of one year in prison, reduction in rank and a bad conduct discharge. But many Arabs questioned the fairness of the legal proceedings in Baghdad and said Sivits should have received a harsher sentence.

Earlier this month, Defense Secretary Donald H. Rumsfeld told members of Congress that the Iraq prison abuse scandal could worsen with the release of more images of brutality. A Senate aide said then that senators have been told videotapes are believed to exist showing rape and the corpses of what are possibly murder victims.

An international outcry about abuse at Abu Ghraib was set off when CBS aired photos from the prison on April 28. Months before that, the Red Cross had complained to the U.S. military about treatment of prisoners in Iraq and an internal military investigation also had found problems.

Assistant Defense Secretary Powell A. Moore told Warner in a letter to Warner that 13 of the photos appear to have been already shown on international television and that the other 11 "may not be original or true photographs."

Senators have seen many abuse photos not released to the public. The Pentagon has been weighing whether to make the rest public. Some in Congress have warned that withholding the photos only insures that the abuse scandal will keep reemerging as additional images are leaked.
At the same hearing, the top military commander in Iraq told Congress that the troops at Abu Ghraib and their entire chain of command will be investigated as part of the probe into abuse of Iraqi prisoners. Lt. Gen. Ricardo Sanchez added: "And that includes me."

Maj. Gen. Geoffrey Miller, the former Guantanamo Bay commander who studied Iraq prisons last summer and recommended the military guards "set the conditions" for interrogations, told the CBS News Early Show, "The detention centers in Iraq were set up to detain the security internees and to also be able to develop actionable intelligence to help our forces win the battles."

Miller insisted that "there was no official policy, nor any sanction of any of the abuses of this type."

"Your army does not do things like this," Miller said. He added that having visited all the detention facilities in Iraq, "I can guarantee you with absolute certainty that there are no abuses currently ongoing within any of our facilities."

While Sivits faced what the Army calls a special court-martial, similar to a misdemeanor trial, the six others who have been charged will probably face general courts-martial, which can yield more severe punishments.

The three in court Wednesday — Sgt. Javal Davis, Staff Sgt. Ivan L. Frederick and Spc. Charles Graner Jr. — waived their rights to have charges read aloud, and their pleas were deferred pending another hearing June 21. The defense complained it was denied access to two victims of abuse who were government witnesses, and the judge asked prosecutors for an explanation.

Arab television stations appeared deeply skeptical of the Sivits proceedings, with reporters from the Al-Jazeera and Al-Arabiya satellite networks questioning why audio and video recordings were not permitted. Others demanded that higher ranking American officials be punished.

"Those who are executing the laws and the orders are not the problem ... Punishment of the officials who gave the orders is what matters," Samer al-Ubedi, who claimed his brother died in U.S. custody, told al-Jazeera. "The punishment must be as severe as the crime."