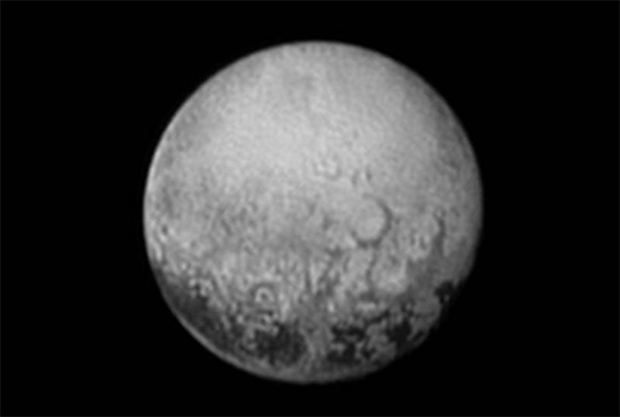 NASA's New Horizons spacecraft beamed back its best shot of Pluto's far side Saturday, the side of the dwarf planet that always faces its large moon Charon, showing intriguing circular features and complex, yet-to-be-explained dark spots along the icy world's equator.

New Horizons will make a close flyby of Pluto early Tuesday, zipping past the opposite hemisphere for a long-awaited closeup inspection. The circular structures and dark areas in the hemisphere shown in Saturday's photo release will not be seen during close approach.

But New Horizons will attempt to image Pluto's far side again as it departs, using sunlight reflected from the Texas-size Charon for illumination.

In the meantime, Alan Stern, the New Horizons principal investigator, said the view captured by the spacecraft earlier Saturday is "the last, best look that anyone will have of Pluto's far side for decades to come.

"The dark areas measure some 300 miles across and are taking on a more complex appearance as New Horizons closes in. A larger more continuous dark area, known as the whale, follows a similar path around Pluto's equatorial region.

"It's weird that they're spaced so regularly," New Horizons program scientist Curt Niebur said of the dark spots in the web posting. Jeff Moore, a scientist at NASA's Ames Research Center, said it's not yet clear "whether they're plateaus or plains, or whether they're brightness variations on a completely smooth surface."

Some of the circular structures in the latest image were seen in earlier photos, but it's not yet clear whether they are impact craters or the result of some other process.

But Moore said the images, combined with data stored aboard New Horizons but not yet relayed to Earth, eventually will enable scientists to "read the history of this face of Pluto."