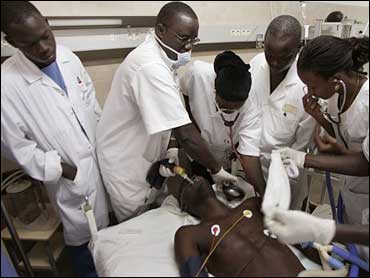 A Japanese scientist says that preliminary tests suggest a vaccine he expects to complete in five years might cut the number of malaria infections by 80 percent in Africa.

Toshihiro Horii, professor at Osaka University's Research Institute for Microbial Diseases, says that his team successfully finished early phase one clinical tests of the vaccine in Japan this month.

The vaccine is based on a type of protein called Serine Repeat Antigen or SERA, he said in recent interviews with The Associated Press. The tests involved 40 men.

While results are encouraging, it is still too early to tell whether the vaccine will be effective for those most affected by malaria: children in Africa. There are about 500 million cases of malaria each year, mostly in the developing world.

Though there have been several malaria vaccine candidates tested in recent years, a viable vaccine has been very difficult to develop, due to the complexity of the parasites that cause malaria. Even the strongest of these candidates, currently being developed by GlaxoSmithKline, is not expected to be ready before 2009.

Horii's first tests were conducted in Japan, though there are only about 100 cases of malaria annually in the country, he said.

Because more than 90 percent of the world's malaria cases occur in Africa, it is essential that any malaria candidate vaccines be tested there, and preferably in children. Malaria is the leading killer of children under five in sub-Saharan Africa. Horii plans to test the SE36 vaccine in adults later this year and children in 2008 in Uganda.

Horii acknowledges that further clinical tests are necessary to determine the vaccine's efficacy.

He estimates the vaccine could be commercially available in five years. The vaccine is being developed through collaboration between Osaka University and the World Health Organization's Special Program for Research and Training in Tropical Diseases.

"This is an interesting candidate vaccine because it is based on an immune response to a particular protein," said Dr. Marie-Paule Kieny, director of the initiative for vaccine research at the WHO in Geneva.

She said that the type of protein is detected in some people who seem to have immunity to malaria from previous infection.

"The protein has been shown to be safe and immunogenic ... but the road is very long between where we are now and actually having a usable vaccine," she said.

"It would be very important to have a vaccine against malaria because the drug resistance of the parasite is increasing, so having a vaccine would be like having the ultimate weapon against malaria," she said.

Motomi Torii, professor of malaria parasite biology at Ehime University in southwestern Japan who is not involved with Horii's study, said that scientists worldwide have been studying some 10 different types of protein for possible malaria vaccines.

He said that they were still in the early stages of study, underscoring the difficulty of finding a vaccine because the malaria parasite is adept at fooling the human immune system.

Torii said that the results of Horii's early tests have been promising, and the SE36 vaccine "has a high chance of becoming successful."