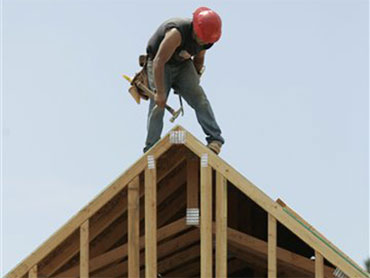 Excluding transportation, durable goods orders fell 1 percent in April. But that came after the March figures were revised to show a 4.8 percent jump. A durable good is a product that is expected to last at least three years.

A separate report from Commerce showed of new single-family homes jumped 14.8 percent to a seasonally adjusted annual rate of 504,000 units. The April gain followed a 29.8 percent surge in March, the biggest monthly increase in 47 years.

Housing: Was April Last Good Month For a While?
For Sale By Owner: Tips For Going It Alone

Housing sales were pushed higher this spring by a stampede of buyers trying to sign sales contracts before tax credits expired on April 30. Historically low mortgage rates also helped fuel purchases. But sales are expected to slump in the coming months as households deal with slow job growth and tight credit.

Manufacturing has held steady during the recovery. U.S. companies are benefiting from rising demand at home and in major export markets.

There are concerns that a debt crisis in Europe could derail the global recovery. Financial markets have been roiled in recent weeks by fears that the problems facing Greece could spread to other heavily indebted European countries, such as Spain and Portugal.

But economists say the U.S. manufacturing industry may be strong enough to weather Europe's troubles.

The big jump in home sales did not boost home values. The median sales price fell to $198,400 in April, 9.6 percent below the March median price for a new home. The median is the midpoint where half the homes sold for more and half for less.

The two months of big sales increases pushed sales activity to the highest level since May 2008. But sales remained well below the peaks set at the height of the housing boom.

Sales showed strength in all areas of the country in April except the Northeast. Activity there showed no change last month.

First-time buyers were eligible for a tax credit of up to $8,000. Current owners who bought and moved into another home could qualify for a credit of up to $6,500. Buyers had to sign contracts by April 30 but they have until June 30 to close on the sale.