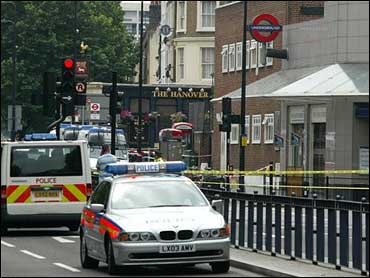 London police confirmed there were four explosions midday Thursday at three subway stations and on a double-decker bus, in what the city's police chief calls "serious incidents."

"At the moment the casualty numbers appear to be very low ... the bombs appear to be smaller," than those which rocked three Underground stations and a bus two weeks ago.

Only one person was reported wounded, but the explosions during the lunch hour caused major disruption in the city and were hauntingly similar to the July 7 bombings in which 52 people and four suicide attackers were killed.

Sky News TV reported that police were searching for a man with a blue shirt with wires protruding.

The explosions did not shut down the subway system, although three lines remained closed more than two hours later.

Police in chemical protection suits were seen preparing to enter the Warren Street Underground station. Sky News reported that police said no chemical agents were involved in the explosions.

Explosions also were reported at the Shepherd's Bush and Oval stations.

British Transport Police said one person was hurt at Warren Street, but they did not know how serious the injury was.

Sky TV showed live footage of a double-decker bus parked by the side of the road and said its windows had been blown out. In the footage, there was nobody on board or nearby and the streets appeared to have been cordoned off.

The bus operator said the windows of the double-decker bus were blown out.

One witness at Warren Street said he had been told by another subway passenger that a rucksack had exploded.

Eyewitness Jimmy Conners, who was aboard the train at Warren Street, told CBS News there was "the smell of burning wire… we thought we were all going to die… everyone was just panicking and heading for the doors."

Police cordoned off streets near Warren Street, and officers with sniffer dogs checked the area.

McCracken said another passenger had claimed he had seen a rucksack explode. The July 7 bombs in London were carried in rucksacks, police said.

McCracken said he smelled smoke and that people were panicking and coming into his carriage.

McCracken said he spoke to an Italian man who was comforting a woman after the evacuation.

Services on the Victoria, Northern and Hammersmith and City lines were suspended following reports of a number of incidents, London Underground said.