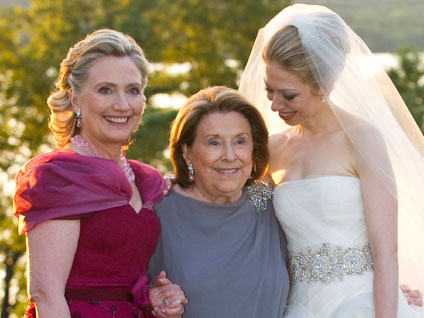 NEW YORK (CBS) Three generations of women pose side by side in a newly released photo from Chelsea Clinton's wedding.

The image shows the bride posing with her mother, Secretary of State Hillary Clinton, and her grandmother, Dorothy Howell Rodham.

The picture shows more of Clinton's ivory strapless gown with a laser-cut organza ballgown skirt and a sparkly belt, which was designed by Vera Wang, and also gives a better look at her mother's dress, a fuchsia gown with floral details by Oscar de la Renta.

A guest at the wedding told People magazine that when the mother of the bride walked down the aisle, "it took your breath away."

"She looked stunning-like a princess. She was beaming," the guest continued.

A friend of the secretary of state added that she was "so thrilled and over the moon about the dress" and her role as mother of the bride.

And another friend of the Clintons told the magazine it was important that Chelsea's grandmother, seen in the photo wearing a grey dress with a sparkly brooch, was included in the big day.

"It was so important to Hillary to share her daughter's day with her own mother. When the three of them are together Hillary isn't the secretary or the senator or the celebrity -- she is her mother's daughter and her daughter's mother."