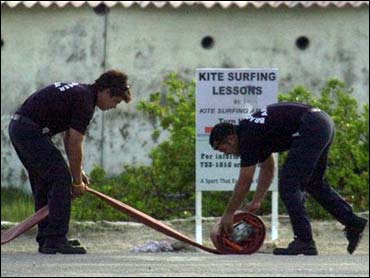 More than two weeks after an Alabama teen disappeared, Aruban police once again came up empty-handed after searching a swampy beachfront based on information from a former security guard who said three young men may have lied about what happened to the missing student.

FBI agents and officers from the Miami-Dade police department brought two bloodhounds to help search an area of tropical vegetation next to the Marriott Hotel on Tuesday as firefighters pumped water from the site. At nightfall, they gave up the search for good.

"We didn't find anything," police spokesman Edwin Comemencia told The Associated Press. He declined to say where investigators might look next.

Meanwhile, the father of a 17-year-old Dutch youth who last was seen with Natalee Holloway is filing suit to demand he be allowed to see his jailed son, police said.

The father, a high-ranking judicial official, "is going to file a motion to see his son," police spokesman Edwin Comemencia told The Associated Press. The son is an honors student at Aruba International School.

Judicial officials could not immediately be reached to explain Aruba's laws concerning the detention of minors and their rights.

The latest search came after a former hotel security guard who was released from custody Monday told reporters that he spoke with one of the three youths while he was detained in an adjacent jail cell.

Antonius "Mickey" John said 21-year-old Deepak Kalpoe, of Suriname, told him that he, his younger brother and their Dutch friend lied about returning 18-year-old Holloway to the Holiday Inn on the morning of May 30, the day Holloway disappeared on this Dutch Caribbean island.

Instead, Kalpoe said, they dropped the Dutch youth and Holloway off near the Marriott, about 10 blocks north of the Holiday Inn, John said. The area searched Tuesday, Malmok beach, is next to the Marriott's Palm Beach, and is a popular spot for nighttime lovers.

Kalpoe also allegedly told John that about an hour after dropping the couple off he received a cell phone text message from the Dutch teen, saying he would e-mail Kalpoe as soon as he got home. Kalpoe said the Dutch youth never sent the promised message, John said.

Holloway vanished hours before she was expected at the airport to return home after a vacation with 124 classmates and seven chaperones celebrating their high school graduation in Mountain Brook, Alabama. Her U.S. passport and packed bags were found in her room.

The two Surinamese brothers had told police that the 17-year-old Dutch youth and Holloway were kissing in the back seat of a car, and that when they dropped her off about 2 a.m., they saw a black security guard in a black security jacket approaching her.

John swore he was never in the area at that time of the night and said that Kalpoe apologized to him in jail. "He told me, 'Sorry,' and told the police I should be free."

A couple of Holloway's family members arrived on the scene Tuesday afternoon as police cordoned off several streets in front of the Marriott and investigators descended upon the swampy terrain next door.

Asked why police searched the area, Comemencia replied, "We got some information we needed to check." He would not say if authorities were acting on what John said. He also declined to comment on whether any of the three young men still in custody had changed their versions of what happened the night the teen disappeared.

In Mountain Brook, a family spokeswoman said she had not seen live TV coverage of the search.

"I'm not even watching it. I just can't," Marcia Twitty said.

Relatives described the last two weeks as a roller coaster ride and that this latest trip was another trip up, Cobiella reports.

Reporters from Aruban radio station Top 95 launched their own search before police arrived, at the Marriott, finding a pair of torn pink-and-white polka dot panties and three condoms, two of them used, said one of the journalists, Albert Vrolijk.

He said they also found some duct tape wrapped around a tree. The reporters handed their findings over to police, who refused to comment.

Tourism Authority Managing Director Myrna Jansen-Feliciano told the AP that "the whole beach area is a place where couples go."

"It could be anybody's" panties and condoms, she said.

The release from jail of John and another former hotel security guard, Abraham Jones, 28, came after Holloway's mother, Beth Holloway Twitty, told several media outlets that she believed they were innocent but that the three other youths knew what happened to her daughter.

The Dutch teenager is an honors student at Aruba International School and the son of a high-ranking judicial official in Aruba.

He is only one of the three who has not talked to Holloway's family, Cobiella reports.