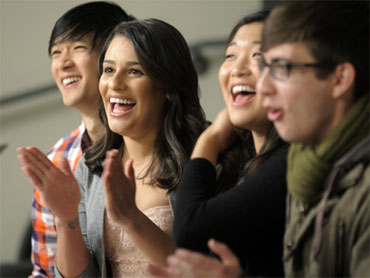 There is hope for broadcast TV comedy and for smart, tough women of a certain age, according to Tuesday's Golden Globes nominations.

After a fallow period in network comedy, this season's lineup is so strong that four of the five nods for best comedy or musical went to broadcast shows, including ABC freshman "Modern Family."

NBC's "30 Rock" and "The Office" also received nominations in the category, as did Fox's "Glee," a sassy, clever take on the high school musical. The one cable contender is HBO's "Entourage."

"I'm thrilled to be in such great company and it underlines my conviction that the best writing for women today is on television," Close said in an e-mailed comment. "I know I wouldn't have received this great nomination if it weren't for our writers on `Damages."'

Youth was not ignored, with Lea Michele of "Glee" earning a bid for best actress in a musical or comedy.

"I got up right after 5 this morning and figured I'd turn on the TV to see if our show got nominated, and literally the first thing I heard was, 'Glee' got two nominations - for Jane Lynch and Lea Michele. And I thought, 'Did THAT just happen?!"' Michele said.

"I have not moved from that same spot on the couch yet. I'm in shock," she said.

The show also earned a best-actor nod for Matthew Morrison, who plays a teacher and glee club adviser.

Neil Patrick Harris, a supporting actor nominee for CBS' "How I Met Your Mother," called the recognition "very exciting" and joked that he'd like a worthy gift from either CBS, which airs the show, or producer Twentieth Century Fox Television.

"Maybe this year CBS or Fox will give me a new car. Didn't they do that with all the `Will & Grace' people once? Didn't they give them all Miatas for getting nominations or something? One can dream," Harris said.

If comedy is making a comeback on network TV, it's still cable that prevails in drama, according to the Globes. The best drama contenders are HBO's "Big Love" and "True Blood," Showtime's "Dexter" and AMC's "Mad Men." On the network side, Fox's "House" got a best drama bid.

"I can't believe we're in our sixth year. It still feels new. The fact is we are, and it is very difficult to keep it fresh. ... It's gratifying that people are responding, and people think we're still fresh," said executive producer David Shore.

HBO, as is its habit, claimed most of the glory in the miniseries or movie category, with contenders including its "Grey Gardens," Into the Storm" and "Taking Chance." Bids also went to "Little Dorrit," PBS, and "Georgia O'Keeffe," Lifetime Television.

Lifetime made a splash with three nominations for "Georgia O'Keeffe," its probing portrait of the famed artist. With its fourth nomination, for Sigourney Weaver in the movie "Prayers for Bobby," Lifetime has the most of any basic cable network, and edges out ABC and PBS.