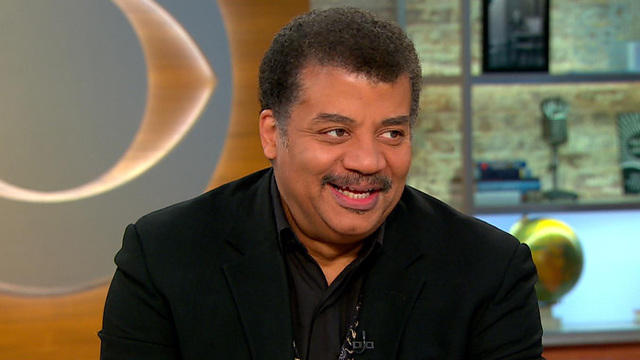 From stars to black holes and the planets, Astrophysicist Neil deGrasse Tyson and two of his colleagues gives a “tour of the universe” in their new book, “Welcome to the Universe: An Astrophysical Tour.”

“There’s so many books today that are a mile wide and an inch deep and that’s fine if it’s your first exposure, but we felt it was time to take you a mile deep as well. So it’s a tour of the universe,” Tyson told “CBS This Morning” Tuesday. “And once you do that, you learn not only what we’ve come to know about the universe, but how we figured it out and that’s what will distinguish this book from others on the shelf.”

The book delves into the earliest theories of space, from Albert Einstein’s theory of relativity, dark matter and cosmic strings, to the search for life in the galaxy. One entire chapter in the book is dedicated to calculating the number of communicating civilizations in the galaxy using the Drake equation, named after astrophysicist Frank Drake.

The authors “hacked away” from the total number of stars in the galaxy – several hundred billion – to conclude there were currently about a hundred civilizations in the galaxy.

“What do you mean by intelligent life?” co-host Charlie Rose asked.

“We’re doing the defining. Maybe we come upon life that is so advanced beyond us that they would not classify us as intelligent,” Tyson said.

“But if you’re making these classifications and you’re defining these civilizations, don’t you have to have a definition?” Rose asked.

“It’s a clean way we think about this.“We have the capacity to send radio signals out there which penetrates the clouds of the galaxy and can reach its destination at the speed of light,” Tyson said. “If you have our civilization and can do that too, that’s the functional definition of intelligence civilization.”

The book also discusses the potential of an asteroid strike – which Tyson said was not a matter of if, but when. Tyson said the size can help measure the energy of the encounter, and that scientists now have a “very good sense” of how climate is affected by local phenomenon.

“And so in the old days, you might have thought asteroid hits here, kills everything there, but everybody else is okay. No -- above certain size asteroids, it wreaks havoc climatically across the planet. And so it can render mass extinctions as it happened with the dinosaurs 65 million years ago,” Tyson said. “I bet if they had a space program, they would’ve deflected the asteroid – but of course they were dinosaurs.”