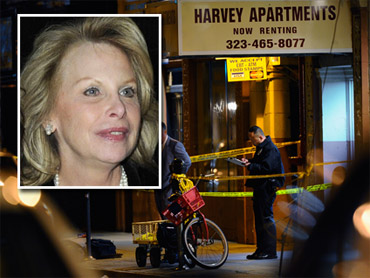 The man who killed himself just as police zeroed in on him as a "person of interest" in the slaying of a prominent Hollywood publicist was regarded as a danger by some of his apartment house neighbors but friendly by others.

One person said the man they knew as Harold Smith bragged about killing Ronni Chasen and was waiting to receive the $10,000 he was promised for the hit.

When detectives tried to question him in the lobby of the dreary Harvey Apartments Wednesday night, the man raised a gun to his head and shot himself to death. Authorities would not confirm his identity.

Sammy Zamorano, who works in a nearby music studio, was in the four-story building shortly after the suicide. He said the body was slumped against a wall with arms on either side. Blood sprayed the lobby.

Profiler: Ronni Chasen Killer was Close to Her
Police: Man Linked to Chasen's Death Kills Self

Zamorano said the man spent hours each day hanging around outside the building, always had a bicycle and usually wore gloves. "To me he was mental, criminal, but not so sophisticated. He had very bad vibes," Zamorano said.

When A Clique Excludes Your Kid

Zamorano said he did not believe the man could have carried out a seemingly professional hit.

Terri Gilpin, 46, said the man always seemed paranoid, would ask if police were looking for him, and "had a screw loose." She said she once called police on him because he wandered into her apartment.

She said she heard him bragging about Chasen's killing and talking about how he was going to be paid $10,000 and was waiting on the money. She said he told her, "You know that lady on TV, that publicist? I did it, I did it."

Chasen, 64, was shot multiple times last month as she drove home in her Mercedes from a party after attending the premiere of the movie "Burlesque," whose soundtrack she was promoting for an Oscar nomination.

Asked why she didn't call police after hearing his comments, Gilpin said she and her husband didn't believe him.

But at least one person painted a brighter picture of the man who lived in Apartment 329 by a fire escape at the back of the housing complex.

The man moved in sometime this year and was friendly and well-known in the building, said resident Robin Lyle, 44, who lived next door to him. "He always told me how much he liked me," he said.

Lyle said the man had been in prison and was concerned about how hard it would be to find work. He told him about a lawsuit that he filed against his former employer and the settlement he was expecting for wrongful termination.

"I'm waiting on this money, and then you're not going to see me anymore," Lyle remembered him saying.

Since Chasen's killing, speculation has reigned about who could have killed her and why. Police have said they were considering all possibilities, including that someone ordered her killed.

Bratton responded, "All the options are still on the table. This investigation has moved quite far along. They will be able to examine the weapon the gentleman had in his possession, they will be able to question his friends, relatives, review his activities. Weapon will be key."

The dead man had been identified, but his name was being withheld pending notification of family, the coroner's office said.

Detectives reviewed surveillance video from the Harvey Apartments' lobby and confirmed the man died of a self-inflicted gunshot wound to the head. Police recovered the handgun and planned to do ballistics testing.

Beverly Hills police Chief David Snowden told The Associated Press in an e-mail that the man "was a person of interest only" and a police spokesman emphasized that the murder investigation was not over.

The Hollywood blogosphere is consumed by this real life whodunit, CBS News correspondent Ben Tracy said. There are now competing theories as to what happened to Ronni Chasen. One Hollywood journalist reports that Chasen was killed by a hit man because of a business deal gone bad.

Allison Hope Weiner, of Deadline Hollywood.com, said, "They have a suspect in mind and that they're getting closer to closing in on that suspect, and that is probably the person that paid the shooter to kill Ronni Chasen."

Details about Chasen have continued to emerge as well.

The celebrity publicist was apparently a very wealthy woman. TMZ obtained at least one version of her will, which shows a net worth of $6 million. Chasen gave nearly $60,000 to charity and the rest to her family.

TMZ also quotes sources saying Chasen had a fierce temper and may have been the victim of road rage when she was shot and killed on November 16, while driving home from a movie premiere.

Amid the rampant speculation, Bratton add the police have done a "phenomenal job" keeping the investigation quiet.

He said, "In the gossip-centric City of Los Angeles, TMZ, the rest of them, getting bits and pieces, and not the whole story. The police have ... (been) keeping a lid on this, which allows them to pursue all these different leads, all these different avenues of investigation. And I know frustrating to the public and the media, but it's the way police work is to be done."

Hill asked Bratton, "When there's so much interest in a case, such a high-profile murder like this one, does that affect the investigation at all?"

He said, "Probably phenomenal amounts of information coming in you just had on your little lead-in, TMZ, for example, taking credit for one avenue of the investigation, I think Mr. Walsh from 'America's Most Wanted' is claiming credit for the lead that led to this particular gentleman who just took his life. Everyone is getting into the game with their own theories."

Hill said, "One of the things TMZ was report they go obtain ad copy of this will, multi-million dollar, one of the copies they obtained, and there were also some details in there about what was left to whom and how a family member may have been -- not exactly left out of the will -- but not really left a lot of money, a little bit like $10, maybe sticking to someone."

Bratton said, "Let's pursue that aspect briefly: You're left out of the will, you are now going to kill the person because you're not getting anything or are you going to spend a few years trying to get back in her favor to get back in the will? It's all speculation at this stage of the game. A couple weeks ago I appeared on this show and not much has changed since two weeks ago in terms of what the potential theories are. It's still a great Hollywood whodunit."

Academy Award-winning composer Hans Zimmer will remember Chasen when he receives a star Wednesday on the Hollywood Walk of Fame. A statement from organizers said Zimmer will dedicate his star to his longtime friend and publicist.