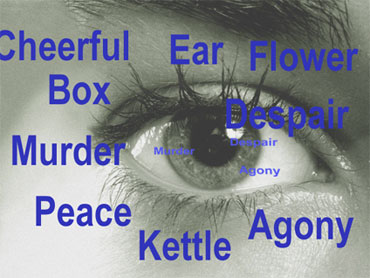 (CBS)
Blink and you'll miss them — or at least you think you will. But researchers have found that not only are subliminal messages capable of getting through to an audience, but that the more negative the subliminal message, the more likely it'll stick.

According to the U.K.'s Independent, an experiment by British researchers shows that not only is the human brain capable of picking up a message or word that has been flashed for a mere split-second, but more importantly that the message's emotional meaning is more likely to be recalled if it is negative.

The Independent's Cahal Milmo writes of a study at University College London in which a subliminally transmitted word with negative connotations was more frequently spotted by participants than were words with positive or neutral associations.

In the study, volunteers were shown a series of positive, negative and neutral words for as little as 17 milliseconds. The participants were then asked to recall and identify words with an emotional value.

Researchers said that the results show humans are programmed on a subconscious level to respond to a stimulus containing a potential threat.

"We have demonstrated conclusively that people are much more attuned to negative words," said Professor Nilli Lavie, who led the research. The study was published in the APA journal Emotion.

Bad news, perhaps, for marketers, for whom the area of subliminal advertising has been reputed or castigated (and in some instances banned) for making barely-perceptible sales pitches.