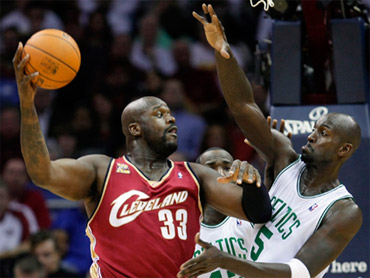 As the U.S. tries to dig out of a deep recession, the NBA is feeling an economic pinch, with gate receipts dropping 7.4 percent from last year, according to a league document obtained by CBSSports.com.

Mike Bass, the NBA's senior vice president for marketing communications, told CBSSports.com in a later statement that ticket revenues were down less then the league projected, but offered no specific figure.

Overall, attendance has dropped 3.7 percent from a year ago.

NBA teams are making an average of $828,985 per game from ticket sales, down from $894,823 at the same point last season. The vast majority of teams, 21, suffered declines while only nine were up or flat.

"The numbers are important because they reflect how even teams with relatively healthy paid attendance - such as the Mavericks, who are averaging 15,373 - are suffering due to pricing pressure from the recession. Dallas' paid attendance is down 8.2 percent, but its gate receipts are down 15.9 percent," writes CBSSports.com's Ken Berger.

The Detroit Pistons, playing in a city battered by a roughly 30 percent unemployment rate, have fared the worst - ticket revenues have dropped 42.8 percent this year while attendance is down 22 percent.

The league's few success stories include the Atlanta Hawks, off to their best start in a decade, with a 26.8 percent increase in gate receipts; the Denver Nuggets (up 20.3 percent); the Orlando Magic (up 17.7 percent); the Portland Trailblazers (up 12.3 percent); and the Cleveland Cavaliers (up 11.8 percent).

As Berger notes, the loss in revenue will impact salary cap figures and luxury tax thresholds for next season. And the widening chasm between richer and poorer teams will likely be an issue in the next collective bargaining sessions. The owners have informed the players association that the current CBA won't be renewed after it expires following the 2010-2011 season.