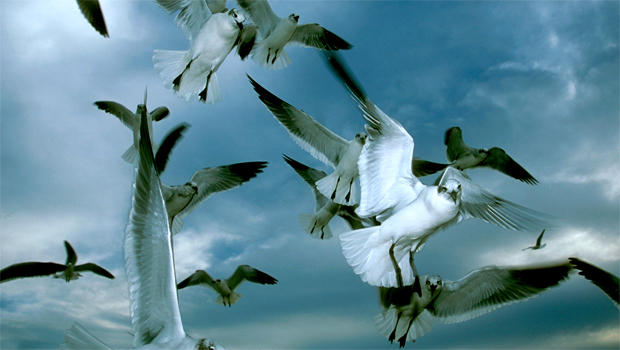 "Moonbird" hatched in the spring of 1993 on Southhampton Island in the Canadian Arctic.  He fed alongside his parents for a few weeks. Then, before he could even fly, his mom left to begin her migration south. A few days later, even before Moonbird could fly, his dad followed his mom south. Less than four weeks after he hatched, Moonbird began flying south himself following the route his parents and ancestors had taken -- almost 10,000 miles over land and water – and which he had never seen. He finally landed in Rio Grande, Tierra del Fuego on the southern tip of Argentina where he spent the winter. In the spring he began flying north, stopping in two places in South America to refuel.

After flying 5,000 miles nonstop and losing half his body weight, he landed in Delaware Bay on the East Coast of the U.S., literally starving to death. Because his arrival coincided with the mating and egg-laying of Atlantic horseshoe crabs, he found a feast awaiting him. He began eating as many as 25,000 horseshoe crab eggs a day for about 10 days. Once he regained his strength (and some fat), he continued his migration north to Southampton Island to reproduce.

Moonbird, more correctly known as B95 (his leg band number), was a male red knot, a medium-sized shorebird weighing a little over four ounces. We know much of his life story because he was banded in Tierra del Fuego in 1995, when he was about two years old, by Patricia Gonzalez, an Argentine biologist. B95 became famous in the bird watching world. Birders learned to look for his band and kept track of him for more than 20 years. He was last recaptured in 2007 when he was found to be "as fit as a three-year-old," and was last seen in late 2014.

Though he hasn't won any gold medals or trophies and doesn't get paid millions in endorsement deals, Moonbird is one of the most successful athletes of all time. Weighing a mere four ounces, he has flown more than 480,000 miles during his life, the distance from the Earth to the Moon and back (hence his nickname Moonbird). For at least 22 years he flew from the southern tip of Argentina to Delaware Bay, up to the Canadian Arctic and then back to Argentina, a round trip of almost 20,000 miles every year.

Many shorebirds, especially red knots, depend on horseshoe crab eggs. Since the 1970s, red knot populations have declined by over 70%. Biologists have linked their decline directly to the population of horseshoe crabs in Delaware Bay.

During May and June in Delaware Bay, along the Delaware and New Jersey shorelines, the largest population of horseshoe crabs in the world comes ashore to spawn. Their eggs provide an essential bounty for several species of shorebirds, including red knots, semipalmated plovers, ruddy turnstones and laughing gulls, as well as royal, common and Forster's terns.

The return of "extinct" species

Red knot populations have been reduced because horseshoe crabs have been harvested for bait in unsustainable numbers.

Horseshoe crabs are a living fossil, basically unchanged for almost 450 million years. They were here for 200 million years before the dinosaurs, and are still here after an asteroid impact wiped out the dinosaurs 65 million years ago. Recently, horseshoe crabs have been threatened due to over-harvesting. Today their harvest has been restricted, but the crabs still experience loss of habitat and human disturbance on their spawning beaches.

Conservation groups and state regulations have increased horseshoe crab protection in recent years. As yet, their numbers have not rebounded. That may be due to their relatively slow maturation rate. A horseshoe crab doesn't reproduce until they are nine years old, or older. Hopefully their populations will increase and result in a corresponding increase in the red knot and other shorebird populations.

In the meantime, you can help. If you see a horseshoe crab that has gotten flipped upside-down or caught between rocks, rescue it. Put it on a smooth section of beach and send it on its way. They are absolutely harmless in spite of their long, sharp tail. Also stay away from the shoreline while birds are feeding, and you will protect both the crabs and the birds.

If you would like to see this spectacle in person, between mid-May and mid-June is the peak time to visit, especially close to the highest tide during that time period.

And if you would like to learn more about Moonbird, National Book Award-winning writer Philip Hoose has written "Moonbird: A Year on the Wind with the Great Survivor B95"  (Farrar, Straus and Giroux). The book received the Robert F. Sibert Award and was a finalist in the YALSA Award for Excellence in Nonfiction.