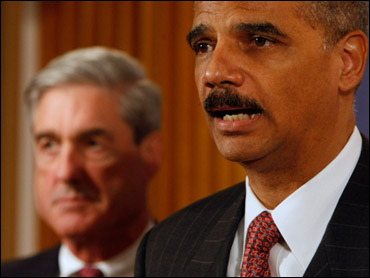 Federal authorities indicted 53 people on Wednesday for schemes to cheat Medicaid out of $50 million.

Suspects were arrested in Detroit, Miami, and Denver as part of a wide-ranging effort by the government to crack down on those allegedly defrauding the government-funded health care program for the elderly and disabled.

Sebelius said the Obama administration is determined to crack down on Medicare fraud through new teams of investigators detecting patterns of false billing. Forty of the suspects have already been arrested and the rest are being sought, authorities said.

"The Obama administration is committed to turning up the heat on Medicare fraud," said Sebelius.

"As demonstrated by today's charges and arrests, we will strike back against those whose fraudulent schemes not only undermine a program upon which 45 million aged and disabled Americans depend, but which also contribute directly to rising health care costs that all Americans must bear," Holder said.

Last month, Holder announced the federal government would step up health care fraud efforts nationally, increasing the budget by 50 percent to $311 million in 2010 and adding manpower to task forces in Miami, Los Angeles, Houston and Detroit.

Forty of the suspects have already been arrested, authorities said. Some of the suspects were living the high life. CBS News obtained exclusive video of one of the arrests - in a wealthy Detroit suburb.

The announcement came in a week that the administration is making a major push to advance health care reform legislation.

According to federal indictments unsealed today, the suspects billed Medicare for "injection and infusion therapy" that was either medically unnecessary or never administered, reports CBS News correspondent Nancy Cordes. They offered cash kickbacks of approximately $25 per visit to patients to play along and invented "sham companies" to launder the money.

Watchdog groups estimate anywhere from 3 to 20 percent of Medicare spending is fraudulent - up to $70 billion dollars a yea, wasted, Cordes reports.

And Medicare spends less to combat fraud than many private insurers, according to Mark McClellan, who ran the massive program under President Bush.

"Doctors billing for more than 24 hours a day worth of services that should be a red flag," McClellan told Cordes. "To detect those kinds of problems, though, you need good computer systems in place, up-to-date monitoring systems."

The administration admits the $50 million scam they stopped today is just a drop in the bucket, but they say they wanted to send a signal they are stepping up enforcement, Cordes reports.

A day earlier, prosecutors in Miami announced arrests in a separate Medicare fraud case. In that case, eight people were charged with trying to steal $100 million from Medicare and Medicare Advantage.

Two of the defendants and about $30 million are still missing.

"The breadth and scope of these schemes is different than what we've seen before," Acting Miami U.S. Attorney Jeffrey Sloman said.

In some ways, Miami federal authorities say, that's good news. It shows Miami's stepped up health care fraud task force is working. They've prosecuted $1.5 billion in health care fraud cases in the past three years. Miami alone has had 146 convictions since 2007 in these cases.

The fact that the suspects had to move to other states and other avenues of Medicare - in this case, Medicare Advantage - signals an understanding on the streets that officials are on to their old tricks. And that the task forces are working, Sloman said.

Medicare Advantage allows the elderly and disabled to get benefits through private health insurers. The plans receive a government subsidy and generally offer more benefits than traditional Medicare.

In most health care fraud cases, the money is easier to track because there's a bank transfer. Authorities say the group owned two check cashing stores, netting between $30,000 and $80,000 in cash several times a week. They fronted through bogus medical clinics around the Southeast. Some of the storefronts in other states were nothing more than P.O. boxes.

Miami has long been considered a hotspot for such crimes. For example, South Florida bills for 75 percent of all HIV insurance claims nationally, though the area is home to less than 10 percent of patients with HIV.