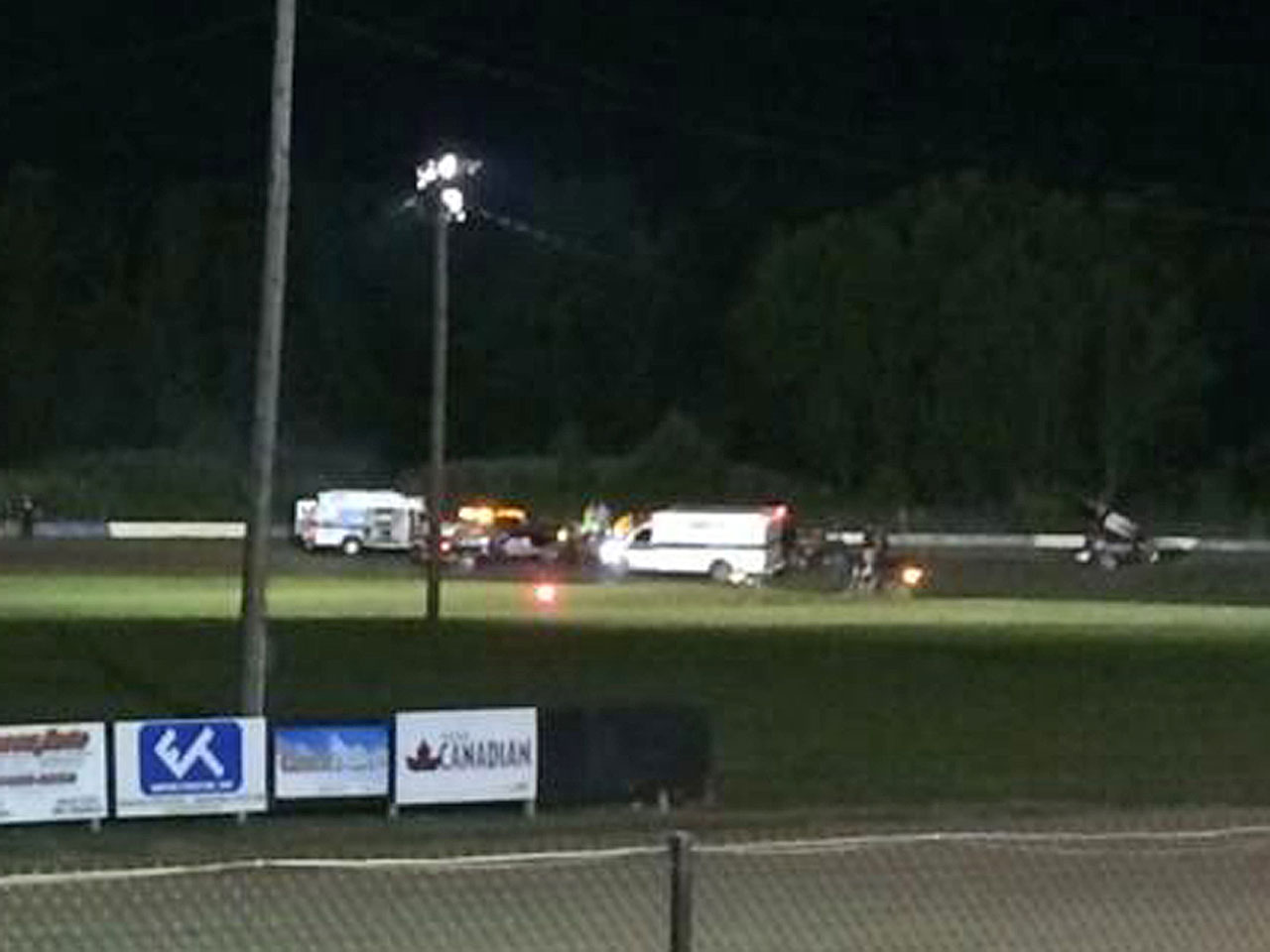 CANANDAIGUA, New York - Three-time NASCAR champion Tony Stewart struck and killed a sprint car driver who had climbed from his car and was on the darkened dirt track trying to confront Stewart during a race in upstate New York on Saturday night.

Kevin Ward Jr. had crashed following contact with Stewart one lap earlier and got out of his car as it was stopped along the fence. Video of the incident showed Ward walking from his crashed car onto the racing surface as cars circled by, and, as he gestured at Stewart's passing car, he was struck.

(WARNING: Video of the incident at left may contain images some viewers find upsetting.)

Authorities questioned Stewart but said no criminal charges were imminent.

On Sunday afternoon, Stewart released a statement that said: "There aren't words to describe the sadness I feel about the accident that took the life of Kevin Ward Jr. It's a very emotional time for all involved, and it is the reason I've decided not to participate in today's race at Watkins Glen. My thoughts and prayers are with his family, friends and everyone affected by this tragedy."

After the incident, Stewart headed back to Watkins Glen, where his team was getting ready for Sunday's Sprint Cup race, reports CBS affiliate WROC in Rochester. Stewart makes frequent appearance for races at the Canandaigua track, WROC reports.

Stewart's team had originally signaled he would race in Sunday's event at Watkins Glen, but announced by mid-morning on Sunday they were withdrawing.

Greg Zipadelli, competition director for Stewart-Haas Racing, said Stewart "feels strongly" he should not race at Watkins Glen following the fatal accident. Regan Smith will replace Stewart in the car.

Ontario County Sheriff Philip Povero said Stewart was "visibly shaken" and had been cooperative in the investigation. Authorities were asking spectators and others to turn over any video they recorded of the crash.

NASCAR said it would not prevent Stewart from racing Sunday, and his team appeared to be trying to focus on the track.

A witness said it appeared Ward was trying to confront Stewart, the three-time NASCAR Sprint Cup Champion. The video showed Ward standing to the right of Stewart's familiar No. 14 car, which seemed to kick out from the rear and hit him.

Moments earlier, Ward and Stewart were racing side-by-side for position as they exited a turn. Ward was on the outside when Stewart, on the bottom, seemed to slide toward Ward's car and crowd him toward the wall. The rear tire of Stewart's car appeared to clip the front tire of Ward's car, and Ward spun into the fence.

Povero said Ward, who was wearing a black firesuit and black helmet, had walked into the racing area and one car swerved to avoid him before he was struck by Stewart.

"The next thing I could see, I didn't see (the other driver) anymore," witness Michael Messerly said. "It just seemed like he was suddenly gone."

"Our thoughts and prayers go out to his family and friends," the spokesman said in a statement. "We're still attempting to sort through all the details."

The dirt track, about 30 miles southeast of Rochester, canceled the remainder of the race and later posted a message on its Facebook page encouraging fans to "pray for the entire racing community of fans, drivers, and families."

Ward's website said he began racing go-karts in 1998 at age 4, but didn't start driving sprint cars until 2010. The 20-year-old from Port Leyden, New York, was Empire Super Sprint rookie of the year in 2012 and this year was his fifth season racing the Empire Super Sprints.

Stewart often competes in extracurricular events. The multimillionaire is known to participate in races with purses worth less than $3,000 and drive alongside drivers of varying ages and talent levels.

The accident Saturday came almost exactly a year after Stewart suffered a compound fracture to his right leg in a sprint car race in Iowa. The injury cost him the second half of the NASCAR season. Stewart only returned to sprint track racing last month, and won in his return, at Tri-City Motor Speedway in Michigan.

But the broken leg cost him the entire second-half of last season and sidelined him during NASCAR's important Chase for the Sprint Cup championship. Stewart wasn't cleared to get back in a race car until February, the day the track opened for preparations for NASCAR's season-opening Daytona 500 began.

"Everybody has hobbies. Everybody has stuff they like to do when they have downtime, and that's just what it is for me," he said last month following his return to sprint car racing. "That's what I like to do when I have extra time. I don't think there is anything wrong with doing it. I feel like there are a lot of other things I could be doing that are a lot more dangerous and a lot bigger waste of time with my time off do than doing that."

Stewart was a spectator at the Knoxville Nationals in Iowa on Tuesday, the one-year anniversary of the accident, and posted on his Twitter account: "Thank you to everyone that worked so hard to get me back to where I'm at today. It's your life, live it!"

Among Stewart's many business interests is his ownership of Ohio dirt track Eldora Speedway, which last month hosted the NASCAR Truck Series, and his stake in Stewart-Haas Racing, which fields cars for Stewart, Kevin Harvick, Kurt Busch and Danica Patrick.

He's struggled a bit this year since returning from his leg injury, and heads into Sunday's race winless on the season and ranked 19th in the standings.

Stewart was scheduled to start 13th on Sunday at Watkins Glen, one of just five remaining races for Stewart to either score a win or move inside the top 16 in points to grab a valuable spot in NASCAR's Chase.

The site of Saturday night's crash is the same track where Stewart was involved in a July 2013 accident that seriously injured a 19-year-old driver. He later took responsibility for his car making contact with another and triggering the 15-car accident that left Alysha Ruggles with a compression fracture in her back.