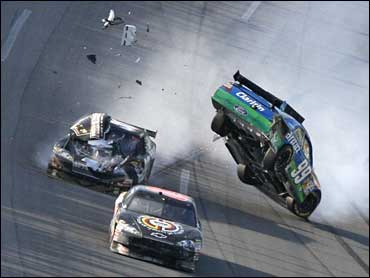 (AP Photo/Glenn Smith)
If Days of Thunder and Talladega Nights are what you think of when you hear the word NASCAR, it might be time to take another look. After covering stories throughout the south over the past couple of years, I learned how pervasive NASCAR was but not until I experienced the ear-splitting and almost ground shaking vibrations of a revving race car, spoke to a few of the drivers and fans did I get why it is as big as it is. Take a dash of competition, a smidge of unparalleled brand loyalty, pour in lots of testosterone and stir with a generous amount of corporate sponsorship and you have one of the largest spectator sports in America.

Walk into the infield of a race track and from motor home, to camper to fifth wheel trailer you'll see families making an entire weekend getaway out of what is usually a three or four hour race. Depending on the race track, they pay a couple of hundred dollars to park there, sometimes another 50 or so dollars to walk in closer to the cars and drivers and sometimes hundreds more to have a full run of the place. The fans buy boldly emblazoned merchandising featuring their favorite driver or car, but the most important thing they buy are the brands.

There are quite possibly no more brand loyal fans. According to NASCAR, Bank of America says every dollar spent with the sport is generating ten dollars in revenue. The energy drink AMP says their sales are up 120 percent in NASCAR race markets, traffic to Dupont.com spikes three times the norm when the URL is flashed on the TV panel of Jeff Gordon's car. If this all gives you a headache, and you're a NASCAR fan, you'll probably be 36 percent more likely to reach for Tylenol than a non NASCAR supporting brand.

Fans like Ken Gregory can rattle off the brand associated with each driver he follows. Amidst the travelling village of motor homes, his is usually recognizable because it is where passer-bys pose for pictures with the life sized cardboard cut-outs of the drivers he plants on the makeshift front lawn. He mentioned to me that when a driver switches teams or a new sponsor comes on board, it usually means a shopping trip to restock his clothing.

At the garage, I caught a brief glimpse of a lanky man in a black cowboy hat, with a thick moustache and dark sunglasses, and I whispered over to my producer Polly Leider: "I think that's the stp-son-of-a-gun-armor-all guy". I'm not a NASCAR follower, haven't seen "The King" in at least a decade or more - but there he was. Somehow, somewhere in the recesses of my memory were the associations with a legendary race car driver and the brand that has been with him for so long. Drivers like Richard Petty raced in cars that were far more "stock" than they are today.

The cars of today or more appropriately the "car of tomorrow" is a category of machine that has so many specifications that regardless of engine manufacturer, chassis, or horsepower, the differences are allowed to be miniscule. It was partly implemented so owners could save money with an almost standard vehicle but it seems several teams have spent some of their savings on high end research and development to shave a second here, a second there.

It takes on average 100 people to keep a NASCAR race car going. The crews working on these cars aren't like Cooter Davenport on the Dukes of Hazard (no disrespect to Cooter fans out there); many have advanced engineering degrees and are helping build these cars to specification from scratch. Their manufacturing facilities can mill everything from an engine block to a cup holder. Engineers are able to run cars on virtual computerized tracks every week and make most of the major adjustments before the rubber ever meets the road.

Perhaps because of the injection of all this technology and a far more standard vehicle, NASCAR is becoming more about a driver's skill than the RFID chips embedded within the tires or the wind tunnel testing. In the sport of Baseball, it is fairly well established that a batter does not have the time necessary to consciously prepare for and execute a swing by the time his or her eyes see the ball, it is in large part muscle memory. So it is with part of NASCAR. Somewhere in the thousands of laps that Carl Edwards #99 has driven, he has learned, like all his competitors that the optimum point of traction through a turn is when the car is ever so slightly sliding. So in order to maximize speed through the turn, it seems drivers skate on the edge of losing control to maintain a top speed, while driving inches away from other drivers skating their roaring metal beasts at top speed for hours. Their only respites are 20 second pit stops when their cars take on fuel, new tires and they have a second to guzzle their sponsor's energy drink.

Brian Vickers, the driver for Red Bull, was honest about his consumption of his primary sponsor. He said it was his morning coffee, some days he drinks more and some days none at all. There are very few drivers who can get away with being, shall we say ill-mannered. The price of sponsoring a top team is somewhere between 20 and 25 million dollars. The drivers who succeed are media savvy, articulate on more topics than just the race, role models when they need to be in front of fans, and every bit as aggressive as they can be when they are on the track. They are able to slip in a mention of a sponsor in the answers to questions, they upload videos from their Flip cameras and send out 140 character blasts on twitter. They live like nomads, spending as much time on motor coaches as they do in their own bed considering they travel 38 weeks out of the year and sometimes are lucky enough to fly home during the middle of the week.

Some of the drivers are buying carbon credits to offset all their travel, but the pollution created by the cars is something else altogether. NASCAR recently has been launching some green initiatives like the one to plant trees for every Green Flag - they say that'll equal 20 acres of trees a year. The raceway where we shot out stories on NASCAR; Pocono is converting one of their parking lots into what is billed as the largest solar farm at any sports facility of any kind. It is green in two ways, besides the environmental benefits of powering a racetrack's needs with a renewable resource, it will also be generating twice as much energy (2MW) to sell to the local power grid. Exide recycles the car batteries, Goodyear has been recycling tires, and Safety Kleen recaptures used motor oils.

Given, that the least polluting thing to do would be to not run the cars at all, these seem to be small steps in the right direction. Critics will call these actions the "greenwashing" of an incredibly dirty sport, but the fact is that every race car and driver carries a message to an audience that is incredibly receptive to hearing and acting on that message. Perhaps the in-field campgrounds won't be full of hybrid motor homes any time soon, but it never hurts to begin messaging 70 million fans.

See Brian Vickers talk about everything from global warming to electric cars:

See Carl Edwards talk about the movie that made him see Green: