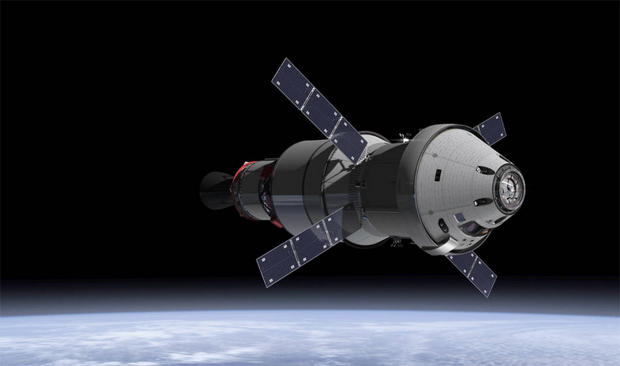 The first piloted flight of NASA's Orion deep space exploration vehicle could slip nearly two years, from the summer of 2021 to as late as spring 2023 because of expected funding levels, design modifications based on lessons learned to date and a variety of complex programmatic issues, agency managers said Wednesday.

NASA is developing the Orion spacecraft and the Space Launch System -- SLS -- heavy lift booster to carry astronauts beyond low-Earth orbit in the 2020s, to the vicinity of the moon and possibly a nearby asteroid before eventual flights to Mars in the 2030s.

The agency is currently working toward two critical milestones: an uncrewed test flight of the SLS and an Orion capsule by the fall of 2018 -- Exploration Mission 1, or EM-1 -- and a piloted mission -- EM-2 -- that would carry a crew of up to four astronauts to the vicinity of the moon to test the fully operational spacecraft.

That flight had been targeted for no earlier than August 2021 and that is still the date the Orion team is shooting for. But NASA managers said Wednesday a more realistic assessment based on critical reviews indicates the flight likely will slip.

"Coming out of the review, (the launch target) was basically set to be no later than April of 2023 at a development cost, from October 2015 to the time we fly a crew for the first time, at $6.77 billion," Robert Lightfoot, a NASA associate administrator, told reporters in an afternoon teleconference

"This is consistent with the funding levels from the president's budget request. It's also consistent with our established practices to make sure we account for any potential technical risks that may manifest themselves, any of the uncertainties we may have related to the budget."

Based on a more thorough review and a detailed assessment of the results of the first unpiloted test flight last December, NASA managers have a 70 percent confidence level in the latest projections.

"Once again, the Obama administration is choosing to delay deep space exploration priorities such as Orion and the Space Launch System that will take U.S. astronauts to the Moon, Mars and beyond," he said in a statement. "We must chart a compelling course for our nation's space program so that we can continue to inspire future generations of scientists, engineers and explorers."

The Orion capsule, built by Lockheed Martin, was initially developed for the Bush administration's Constellation moon program. President Obama, deeming the Constellation program too expensive and unsustainable, ordered a dramatic change of course in 2010, directing NASA to rely on the private sector for space station crew rotation flights while shifting its long-range focus from the moon to deep space.

Boeing and SpaceX are now designing commercial crew ferry ships, heavily funded by NASA, to carry astronauts to and from the space station. At the same time, the agency is developing the SLS megarocket and the Orion spacecraft, designed to support four astronauts for up to 21 days, for deep space voyages. Longer-duration missions to Mars would require a habitation module of some sort that has not yet been developed.

In any case, NASA now expects to spend $7.02 billion on the SLS program through EM-1. The agency spent $5.8 billion on Orion during the Constellation program and another $4.7 billion through October of this year.

Adding in the $6.77 billion NASA expects to spend between October and EM-2, the total cost of Orion will climb above $17 billion by the time the first crew straps in.

"We are building a big program here, we're building a multi-decadal human exploration program," Lightfoot said. "And while the individual launches of EM-1 and EM-2 are very important and they are great indicators of our progress, we've got to balance those individual missions with the overall context of this exploration journey we're on."

Bill Gerstenmaier, NASA's director of space operations, said the agency is "building a producible system that's affordable that we can fly on roughly one-year centers."

"I wouldn't get too worried about these schedules," he said. "If we do our homework right, and we take our time going through the developmental process, and we understand how to improve production and ... make the changes that put the right production systems in place, the right supply lines in place, we can get to a very functional capability that's affordable, we continue to fly these exploration missions that'll ultimately get us ready to go to Mars."

The EM-1 mission in 2018 will be used to test Orion and its service module, built by the European Space Agency. The service module houses the spacecraft's primary propulsion system, propellant tanks, electrical power systems and other critical gear.

"Then comes EM-2. The big thing there are the crew interfaces. How does the crew interact with the vehicle, what are the displays and controls like, what do they do during entry configuration? The other big thing with EM-2 is we get the life support system. ... All those things will be checked out."

If all of that goes well, NASA can begin carrying out more operational deep space missions to develop the techniques and procedures necessary for eventual flights to Mars.

Gerstenmaier said it was too early to say whether EM-2 will play a role in the Obama administration's controversial near-term goal of launching a mission using SLS and Orion to retrieve a piece of an asteroid. More likely, that will come later, assuming Congress approves funding.

"I think the first real critical role that Orion starts playing is when we go to the proving ground of space, a region around the moon where we can get back in several days if something goes wrong," Gerstenmaier said. "We need to take all the skills we've learned in low-Earth orbit (and) start stretching our ability to be comfortable in space.

"The moon is a great place to do that. ... I think Orion's first role will be really to be that tool that will help us go push human presence beyond low-Earth orbit and let us learn the skills, techniques, (to) test hardware in the proving ground of space around the moon that'll actually prepare us to ... start moving out toward Mars."