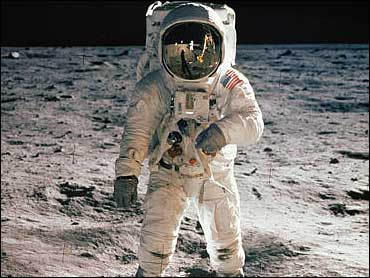 Forward, into the past.

You know by now that NASA has announced their plan to get back to the moon by 2018. The way they want to go is quite similar to the way Americans made it to the moon in 1969 in the old Apollo program. In fact Michael Griffin, head of NASA, described it as Apollo on steroids. It will cost about $100 billion and take 13 years. So the good news -- it's cheaper than the original; the bad news -- it will take twice as long to develop.

I know this is science and it's supposed to be literally over our heads. But, have we made no significant strides in technology that would make it easier to do what was done 35 years ago?

I've been in the old Cape Canaveral bunkers. The computers they used back then couldn't do your taxes. Some of the communication equipment had vacuum tubes.

It just seems odd to me that the achievable goal of going back to the moon seems so expensive and has such a long timeline. President Bush says he thinks Americans should be headed to Mars. At this rate he'll be lucky to see it happen in his lifetime.