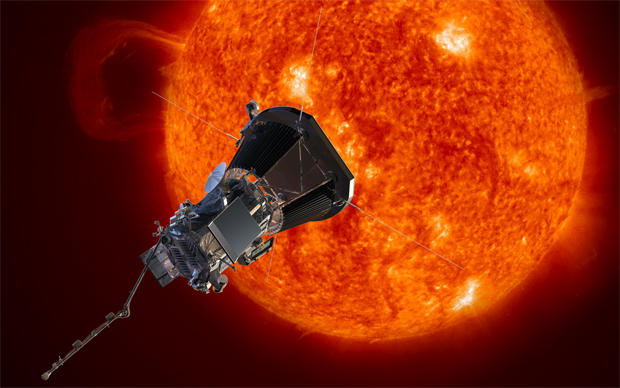 A NASA spacecraft being readied for launch in 2018 will make repeated trips through the sun's outer atmosphere, passing within 4 million miles of the star's blazing surface at more than 430,000 mph to shed light on what powers the sun's high-temperature corona, the origins of the solar wind and the causes of potentially catastrophic solar storms.

The Parker Solar Probe was officially renamed Wednesday in honor of Eugene Parker, the University of Chicago astrophysicist whose landmark 1958 paper predicted the existence of the million-mile-per-hour solar wind and its widespread influence across the solar system. It is the first NASA spacecraft to be named after a living individual.

"NASA has never named a spacecraft after a researcher during their lifetime," Thomas Zurbuchen, chief of science operations at NASA, said during a ceremony at the University of Chicago. "Well, ladies and gentlemen, we're about to make history. It is my great honor, a few days before your 90th birthday, Gene, to announce we're renaming the Solar Probe Plus spacecraft to be known from now on as the Parker Solar Probe."

Parker said he was "greatly honored to be associated with such a heroic scientific space mission."

"By heroic, of course, I'm referring to the temperature, the thermal radiation from the sun," he said. "The extreme measures developed to survive that radiation and collect scientific data should be fully appreciated."

Nicola Fox, the Parker Solar Probe project scientist at the Johns Hopkins University Applied Physics Laboratory, agreed, saying the first spacecraft named after a living scientist will "the hottest, fastest mission -- I like to call it the coolest hottest mission -- under the sun. ... We are going to go right up into the corona."

"Why is the corona hotter than the surface of the sun?" Fox asked. "That defies the laws of nature. It's like water flowing uphill, it shouldn't happen. Why in this region does the solar atmosphere suddenly get so energized that it escapes from the hold of the sun and bathes all of the planets? We have not been able to answer these questions."

The Parker Solar Probe, equipped with a suite of sensitive instruments, is designed to directly probe those basic questions.

"We're going to be seven times closer than any other mission has ever been, and we will repeatedly swoop through the corona making these measurements," Fox said.

Perched atop a heavy-lift United Launch Alliance Delta 4 rocket, the 1,500-pound solar probe is scheduled for launch from the Cape Canaveral Air Force Station between July 31 and Aug. 19, 2018.

The heavy-lift booster, one of the most powerful in the U.S. inventory, is required to counteract Earth's 18-mile-per-second orbital velocity, allowing the spacecraft to drop into the inner solar system.

Even so, the spacecraft will need seven years to reach its target, making seven flybys of Venus along the way and using the planet's gravity to bend the trajectory into the desired elliptical trajectory around the sun.

The low point of the science orbit will be well inside the orbit of Mercury, taking the Parker Solar Probe as close as 3.7 million miles of the sun. The star's gravity will accelerate the spacecraft to a mind-boggling 450,000 mph at closest approach, fast enough to fly from New York to Tokyo in less than two minutes.

"Now, four million miles might not sound that close to you, but if the Earth and the sun were separated by one meter, we would be at four centimeters from the sun," Fox said. "So it's actually very, very close."

Protected by a 4.5-inch-thick carbon-composite heat shield, the Parker Solar Probe will endure temperatures up to 2,500 degrees Fahrenheit while keeping its science instruments at room temperature. It's technology that wasn't available when scientists first started dreaming of a solar spacecraft decades ago.

"As a theoretician, I greatly admire the scientists and engineers whose patient efforts together converted the solar probe concept into a functioning reality," Parker said, "ready to do battle with the solar elements as it divulges the secrets of the expanding corona. So hooray for for solar probe!"