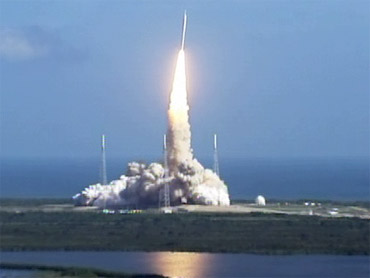 NASA's newest rocket successfully completed a brief test flight Wednesday, the first step in a back-to-the-moon program that could yet be shelved by the White House.

The 327-foot Ares I-X rocket resembled a giant white pencil as it shot into the sky, delayed a day by poor weather.

Nearly twice the height of the spaceship it's supposed to replace — the shuttle — the skinny experimental rocket carried no passengers or payload, only throwaway ballast and hundreds of sensors. The flight cost $445 million.

NASA said the flight was a tremendous success, based on early indications.

The 327-foot-tall rocket roared to life at 11:30 a.m. EDT and majestically climbed away from launch complex 39B at the Kennedy Space Center atop a torrent of 5,000-degree flame and a cloud of churning exhaust, reports CBS News space analyst Bill Harwood.

Liftoff came three-and-a-half hours behind schedule because of overnight thunderstorms and nearby lightning strikes that required unplanned tests.

It was the first time in nearly 30 years that a new rocket took off from Kennedy Space Center. Columbia made the maiden voyage for the shuttle fleet back in 1981.

Liftoff, in fact, occurred 48 years and one day after the first launch of a Saturn rocket, a precursor to what carried astronauts to the moon during the Apollo program. The Saturn V moon rockets were the tallest ever built, an impressive 363 feet.

It was also the first launching in NASA's post-Columbia Constellation program, which calls for development of manned and unmanned Ares rockets, Orion crew capsules and landers designed to support Antarctica-style moon bases in the 2020s, Harwood reports.

But the Obama administration is re-evaluating NASA's manned space program and whether it makes sense to return to the moon while assessing a report from an independent panel of experts that concluded NASA did not have enough money to carry out the Constellation program.

The panel suggested it would make more sense to abandon the Ares I rocket in favor of rockets and crew capsules provide by private industry on a commercial basis. Under that approach, NASA could focus on development of the heavy lift rockets needed to carry astronauts a variety of deep space targets.

Given the political uncertainty in Washington, it's unclear if the Ares I rocket that Tuesday's test flight was designed to support will ever actually fly.

The prototype moon rocket took off through a few clouds from a former shuttle launch pad at 11:30 a.m., 3½ hours late because of bad weather. Launch controllers had to retest the rocket systems after more than 150 lightning strikes were reported around the pad overnight. Then they had to wait out interfering rain clouds, the same kind that thwarted Tuesday's try.

The ballistic flight did not come close to reaching space and, as expected, lasted a mere two minutes. That's how long it took for the first-stage solid-fuel booster to burn out and separate from the mock upper stage 25 miles up. But it will take months to analyze all the data from the approximately 725 pressure, strain and acceleration sensors.

Parachutes popped open and dropped the booster into the Atlantic, where recovery ships waited.

The upper portion of the rocket — all fake parts — were hurtled to an estimated altitude of 28 miles and then fell uncontrolled into the ocean. Those pieces were never meant to be retrieved.

It was all over in six minutes.

"Think about what we just did. Our first flight test and the only thing we're waiting on was weather," launch director Ed Mango told his team.

NASA contends the Ares I will be ready to carry astronauts to the International Space Station in 2015, four to five years after the shuttles are retired. But a panel of experts said in a report to President Barack Obama last week that it will be more like 2017, and stressed that the entire effort is underfunded.

The first Ares moon trip would be years beyond that under the current plan.

No matter what direction the Obama administration takes, NASA managers expect to learn a lot from Wednesday's experimental flight, even if it's for another type of rocket. They said they already have learned a lot.

Hanley, for one, does not want to hear anymore about the cloudy, electrically charged conditions — triboelectrification — that made it so difficult to get this test rocket off the ground. Future rockets will have proper protection.

"Whatever we end up flying, this will not be a problem," he promised.