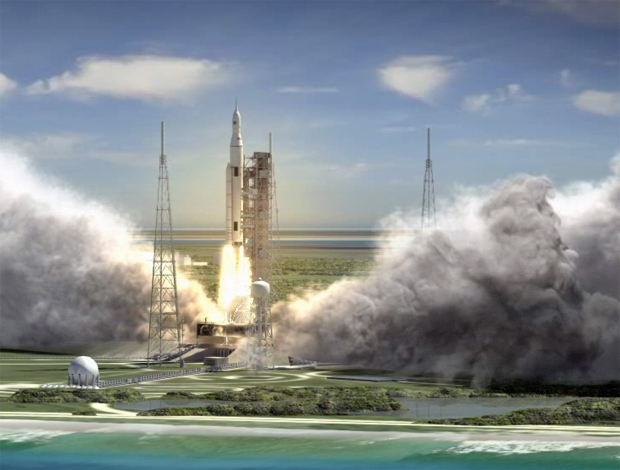 NASA has finalized a $2.8 billion contract with Boeing for development of avionics systems and the 20-story-tall first stage of the agency's planned Space Launch System rocket, a gargantuan booster intended to propel astronauts on missions beyond the moon and into deep space.

More powerful than NASA's legendary Saturn 5 moon rocket, the first SLS rocket is scheduled for its maiden flight, carrying an uncrewed Orion capsule, in 2017. The rocket's second flight -- the first carrying astronauts -- is planned for 2021.

NASA intends to use a more powerful follow-on version of the rocket to boost four-person Orion crews on flights to one or more nearby asteroids and, eventually, the vicinity of Mars.

NASA came up with the SLS rocket after President Obama cancelled the Bush administration's Constellation moon program in favor of a so-called "flexible path" architecture that called for development of new technologies, commercial crewed spacecraft to service the International Space Station and eventual NASA-crewed flights to a variety of deep space targets.

The huge Ares rocket initially intended to carry astronauts and lunar landers to the moon morphed into the SLS after congressional pressure on the Obama administration to accelerate development of a new U.S. heavy-lift rocket.

Boeing originally held two contracts under the Constellation program for development of an upper stage and avionics systems for the Ares rocket. In December 2011, NASA signed undefinitized contracts with Boeing and other major contractors to begin work on the SLS rocket with the goal of incorporating as much of the Ares work as possible.

Boeing's original contracts were merged into one covering development of avionics and the SLS core stage. That contract, which is now finalized at $2.8 billion, also includes funding for preliminary studies of a powerful new upper stage needed for downstream exploration missions.

Boeing also is expected to win a finalized contract this fall to modify a hydrogen-fueled upper stage designed for the company's Delta 4 rocket , now operated by United Launch Alliance, that will be used for the first two flights of the SLS.

A spokeswoman at NASA's Marshall Spaceflight Center in Huntsville, Ala., where the SLS program is managed, said NASA paid Boeing $1.656 billion between 2007, when work on the Ares rocket began, and today. Of that total, $606.5 million went to Ares-specific work. Since December 2011, when the undefinitized SLS contracts were awarded, NASA has paid Boeing $1.05 billion.

The new $2.8 billion contract, signed July 1, extends through 2021. It includes about $700 million that has already been spent on tooling and other SLS items at NASA's Michoud Assembly Facility in New Orleans, where the booster will be built and put together before transport to the Kennedy Space Center for launch.

NASA envisions two versions of the rocket, both using the Boeing core stage.

The initial version will stand 321 feet tall, weigh 5.5 million pounds and be capable of lifting 154,000 pounds to low-Earth orbit. It will be powered by four hydrogen-fueled space shuttle main engines -- NASA has 15 engines and parts for a 16th left in its inventory -- and two five-segment shuttle-derived solid-fuel boosters built by ATK, generating a combined thrust of 8.4 million pounds at liftoff.

While NASA is still debating various options and configurations, the more-powerful follow-on version of the rocket will stand 384 feet tall, weigh 6.5 million pounds and be capable of lifting 286,000 pounds to low-Earth orbit using an upper stage equipped with more powerful J-2X engines and advanced strap-on boosters. At launch, the upgraded version would generate a staggering 9.2 million pounds of thrust.

Earlier this week, NASA and Boeing completed a critical design review of the SLS core stage, a major milestone in the development of the new booster.

"The SLS program team completed the core stage critical design review ahead of schedule and continues to make excellent progress towards delivering the rocket to the launch pad," Todd May, NASA's SLS program manager, said in a statement. "Our entire prime contractor and government team has been working full-steam on this program since its inception."

Work to build the barrel sections and domes that will be assembled into the core stage's huge hydrogen and oxygen tanks is underway at Michoud with avionics development in progress at Marshall.

"Completing the CDR is a huge accomplishment, as this is the first time a stage of a major NASA launch vehicle has passed a critical design review since the 1970s," Tony Lavoie, a senior manager at Marshall, said in NASA's statement. "In just 18 months since the Preliminary Design Review, we are ready to go forward from design to qualification production of flight hardware."

In a Boeing statement, Virginia Barnes, SLS vice president and program manager, said the company is dedicated "to ensuring that the SLS -- the largest ever -- will be built safely, affordably and on time."

"We are passionate about NASA's mission to explore deep space," she said. "It's a very personal mission, as well as a national mandate."

More than 12M "Me Too" Facebook posts, comments, reactions in 24 hours
William Harwood