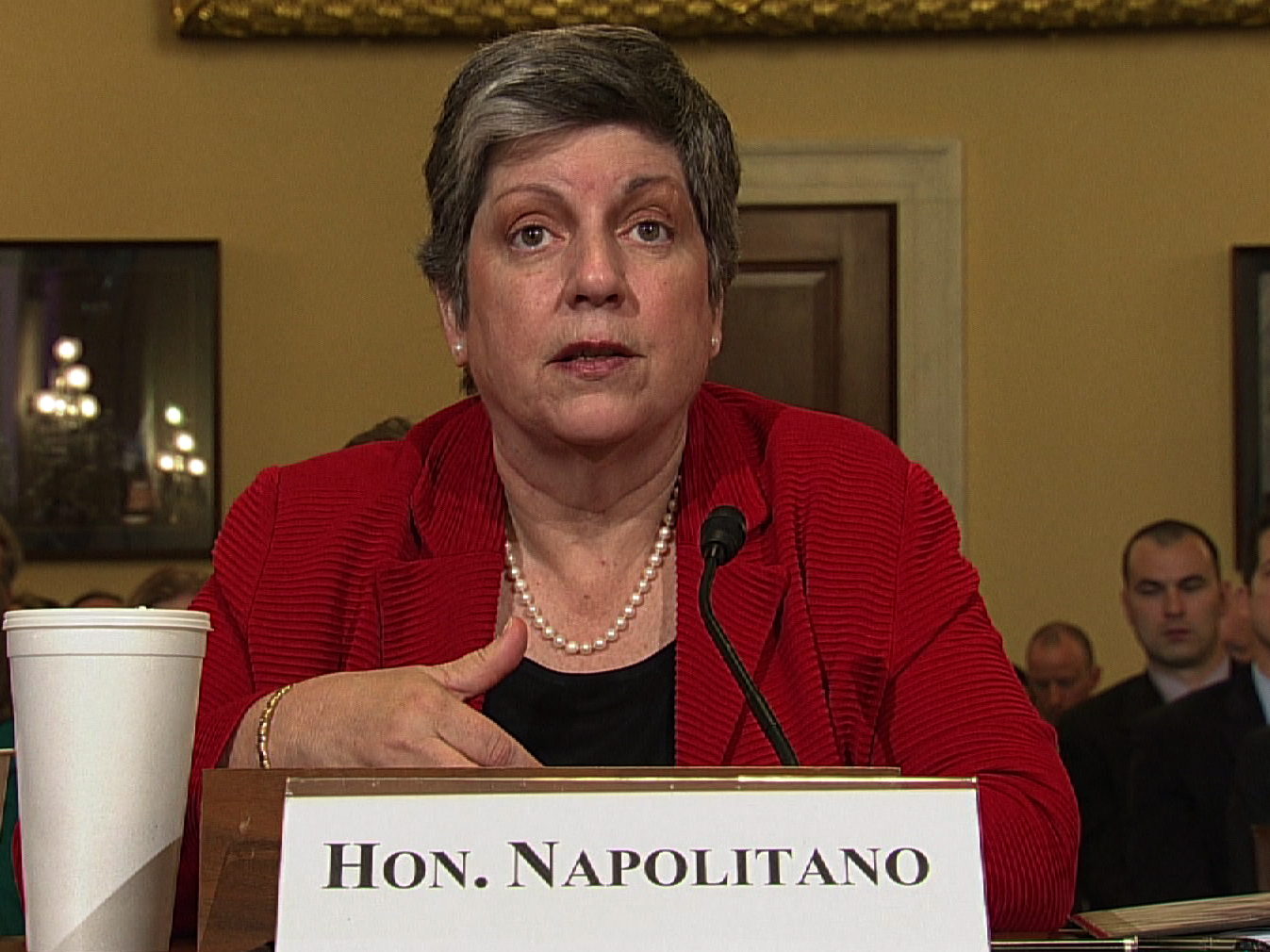 Amid calls from some Republicans to slow down or even halt immigration reform in light of last week's Boston bombings, Homeland Security Secretary Janet Napolitano argued Tuesday that the immigration bill up for debate would actually enhance national security - not detract from it -- and "build on" 10 years worth of investments into the nation's defense, ultimately "strengthening both our overall national security posture and our border security."

"Today, after 10 years of investments in training and equipment and improved information sharing our cities and communities and our nation are stronger, more prepared and engaged and better equipped to address a range if threats," Napolitano said at a Senate Judiciary Committee hearing on immigration reform. "This legislation will build on these gains, strengthening both our overall national security posture and our border security."

In light of last week's bombing, in which three people were killed and nearly 300 were injured when two IEDs exploded at the Boston Marathon, a small group of senators on the right -- including Senators Chuck Grassley, R-Iowa, and Rand Paul, R-Ky. -- have questioned whether or not the Senate should proceed with immigration reform given that the alleged bombers were foreign-born. The calls threaten to derail delicate and longstanding bipartisan negotiations for a bill to overhaul the nation's immigration system, and Democrats have been swift to decry GOP efforts to link the two issues.

"Last week opponents of comprehensive immigration reform began to exploit the Boston Marathon," Sen. Pat Leahy, D-Vt., said at the beginning of an immigration hearing yesterday. "I urge restraint in that regard."

Even so, Grassley continued to urge caution in remarks today at a second immigration hearing, contending that what happened in Boston should serve as a cautionary tale.

"The tragic events that occurred in Boston...[serve as] reminders that our immigration system is directly related to our sovereignty and national security matters," Grassley said Tuesday. "I'm advocating that we carefully review the immigration laws and the administration policies in place."

Paul, in a letter to Senate Majority Leader Harry Reid, D-Nev., Monday, argued the point more vehemently, contending that "the facts emerging in the Boston Marathon bombing have exposed a weakness in our current system" and that "we should not proceed until we understand the specific failures of our immigration system."

"Why did the current system allow two individuals to immigrate to the United States from the Chechen Republic in Russia, an area known as a hotbed of Islamic extremism, who then committed acts of terrorism?" he wrote in the letter. "Were there any safeguards? Could this have been prevented? Does the immigration reform before us address this?"

The two bombing suspects, Tamerlan and Dzokhar Tsarnaev, the first of whom was killed in a shoot-out early Friday morning, immigrated to the United States from Russia around the early 2000s. In light of their actions last week, questions have since arisen about whether the brothers, who were of Chechen descent but do not appear to have ever lived in Chechnya, were at all affiliated with radical Chechen actors. While Dzokhar Tsarnaev, the younger, surviving brother, appears to have indicated in early statements that the brothers acted alone, Tamerlan's 2011 trip to Russia has led to speculation about the possibility that he might have sought foreign assistance with his mission. Russia had previously requested that the FBI investigate Tamerlan Tsarnaev for possible terrorist ties, though the FBI says a subsequent investigation turned up nothing.

Napolitano said Tuesday that the FBI was alerted when Tamerlan Tsarnaev left the U.S. for Russia in 2011, despite the fact that his name was misspelled in one of his travel documents. But, she said, the "matter had been closed" by the time Tsarnaev returned and thus the FBI was not alerted to his reentry.

"By the time he returned all investigations - the matter had been closed," Napolitano said.

She argued, though, that the immigration bill would actually work to reduce human error and thus reinforce the strength of existing systems.

"The bill will help with this, because it requires that passports be electronically readable," Napolitano said. "It really does a good job of getting human error to the extent it exists out of the process."

She also said the Saudi national who was apprehended directly after the bombings was only temporary placed on a "watch list," and that ultimately, he was "in the wrong place at the wrong time."

"He was never even really a person of interest," Napolitano said. She said after he was questioned, it was "quickly determined he had nothing to do with the status," and his name was removed from the list.