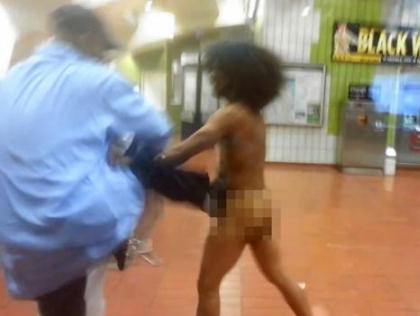 (CBS) SAN FRANCISCO - A man accused of stripping naked and harassing people while doing acrobatic moves at a San Francisco train station has been ordered to stand trial for the May 10 incident, CBS SF Bay Area reports.

Yeiner Garizabalo, 24, was seen in a video posted on YouTube that went viral in the following weeks.

A BART employee testified during the preliminary hearing in San Francisco Superior Court Monday afternoon that Garizabalo ran naked through the station, kicked him and grabbed his genitals while also grabbing several passengers and performing a back flip and other acrobatic moves at the 16th Street Mission BART station.

According to CBS SF Bay Area, maintenance worker Duane Bullard said he saw Garizabalo slide down an escalator into the station, then flip while pulling his underwear down around his ankles.

"His body was built like Bruce Lee and he was doing stuff I've only seen in karate movies," Bullard said.

Bullard testified that he tried to confront Garizabalo, a Colombia native who began making monkey-like sounds and had charged at a young woman who was exiting the fare gates.

Garizabalo kicked the woman, who suffered only minor injuries and was able to run away to safety, Bullard said.

When Bullard tried to confront him, Garizabalo began growling like a gorilla and kicked him in the groin, then grabbed Bullard's penis, the BART employee said.

San Francisco and BART police eventually arrived and took Garizabalo into custody on a psychiatric hold.

CBS SF Bay Area reported that the defendant's attorney, Deputy Public Defender Paul Myslin, said of the case, "It's painfully obvious this is a mental breakdown."

Garizabalo had been performing with a Berkeley-based circus troupe before the incident and members of the troupe came to Monday's hearing to support him.

Garizabalo is due back in court August 19 to be formally arraigned on the seven charges.