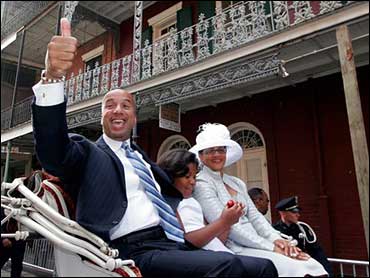 Taking his oath at an iconic site of Katrina's misery, Mayor Ray Nagin began his second term and a new hurricane season Thursday by recounting small miracles in the city and promising bigger ones to come.

Nagin, who defeated Lt. Gov. Mitch Landrieu on May 20, was sworn in at the convention center, a giant riverside complex where thousands of hungry, scared evacuees waited days for rescue last summer as muddy water submerged most of the city.

The ceremony fell on the first day of the June-to-November hurricane season. "How can we do an inauguration on the same day as hurricane season? Lord, have mercy," Nagin joked.

Nagin thanked President Bush and Gov. Kathleen Blanco, who both at times were his adversaries in Katrina's aftermath.

Blanco, pledging renewed teamwork, said: "We are a strong team. If one of us falters, the others will lift us up."

Nagin faces one of the most difficult reconstruction projects in U.S. history, fraught with hard choices about how best to rebuild a low-lying city with enormous tracts of uninhabitable housing and fewer than half its pre-Katrina population of 455,000.

But on Thursday, as he and a new City Council were sworn in, the 49-year-old former cable television executive was wholly optimistic, nine months after Katrina.

"We have an opportunity to again demonstrate the miracle of New Orleans," he said. "The rest of the country saw us at our most vulnerable moment. Now America is getting ready to see our miracle strength as we rebuild this unique cultural treasure."

Nagin, a self-styled maverick who has been sometimes criticized for his glib or angry comments, pledged to improve communication in his second term.

"My administration pledges to be better listeners, precise and consistent communicators of progress. We're talking about miracles here," he said, grinning.

Donald Powell, Bush's aide for Gulf Coast recovery, said the election, which settled the question of who would lead the recovery locally, was another turning point in the city's effort to rebuild.

The ceremony included a gospel choir from Nagin's church and a marching band assembled from three predominantly black high schools forced to merge after Katrina wiped out much of the city.

Nagin wiped away a tear during an emotional speech by his brother-in-law Cedric Smith.

Smith noted that voters had no idea four years ago what Nagin would face or what he would be forced to do as muddy water drowned his city.

"I already sense you are a changed man. You would be less than human if you weren't," Smith said, choking back tears. "I challenge you to embrace that change."