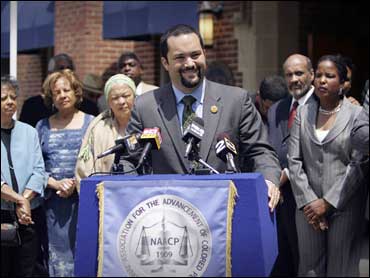 The NAACP chose 35-year-old activist and former news executive Ben Jealous as its president Saturday, making him the youngest leader in the 99-year history of the nation's largest civil rights organization.

The 64-member board of the National Association for the Advancement of Colored People met for eight hours before selecting Jealous in the early morning Saturday. He was formally introduced later Saturday and will take over as president in September.

"I'm excited," Jealous told The Associated Press. "I think that it's a real affirmation that this organization is willing to invest in the future, to invest in the ideas and the leadership of the generation that is currently raising black children in this country."

Though he is not a politician, minister or civil rights icon, Jealous provides the organization with a young but connected chief familiar with black leadership and social justice issues.

He takes the helm as the NAACP's 17th president just months before the organization's centennial anniversary, and as the group looks to boost its coffers.

"There are a small number of groups to whom all black people in this country owe a debt of gratitude, and the NAACP is one of them," Jealous said. "There is work that is undone. ... The need continues and our children continue to be at great risk in this country."

Jealous succeeds Bruce Gordon, who resigned abruptly in March 2007. Gordon left after 19 months, citing clashes with board members over management style and the NAACP's mission as his reasons for leaving. Dennis Courtland Hayes had been serving as interim president and chief executive officer.

Jealous was born in Pacific Grove, California, and educated at Columbia University and Oxford University, where he was a Rhodes Scholar.

He began his professional life in 1991 with the NAACP, where he worked as a community organizer with the Legal Defense Fund.

During the mid 1990s, Jealous was managing editor of the Jackson Advocate, Mississippi's oldest black newspaper.

From 1999 to 2002, Jealous led the country's largest group of black community newspapers as executive director of the National Newspaper Publishers Association.

Jealous left the Publishers Association for Amnesty International to direct its U.S. Human Rights Program, for which he successfully lobbied for federal legislation against prison rape, public disapproval of racial profiling after Sept. 11, and exposure of widespread sentencing of children to life in prison without the possibility of parole.

Since 2005, Jealous has served as president of the Rosenberg Foundation, a private institution that supports civil and human rights advocacy. His experiences caught the attention of the NAACP's search committee, and Jealous said mentors encouraged him to take the job.

"Like all black people in this country, I am deeply grateful for what the NAACP has accomplished in the 20th century, and I want to make sure it's as strong and as powerful in the 21st century," he said. "If I thought that I could help rebuild, if I thought that I could help bring in more funds and give direction to the national staff and increase morale, I needed to take it very seriously, and that's what I've done."

The NAACP was founded in 1909 by an interracial coalition that battled segregation and lynching and helped win some of the nation's biggest civil rights victories. But in the wake of racial advances, the organization has struggled financially.

Jealous said blacks in America still have difficulties and that the gains of recent decades have created a false sense of progress.

"Those of us who are 45 and younger were told, 'The struggle has been won. Go out and flourish. Don't worry about the movement,"' he said.

Among his plans for the group are strengthening its online presence to connect with activists, mobilize public opinion and build a database for tracking racial discrimination and hate crimes; ensuring high voter turnout among blacks in the November election; pushing an aggressive civil rights agenda, regardless of the makeup of the Congress or White House; and retooling the national office to make it more effective at helping local branches affect change in their communities.

Jealous - whose resume doesn't reflect a record of longevity in the workplace - said he's ready to settle in for the long haul. He has spent much of his life in California but has roots in Baltimore, where the NAACP is based. His mother was born in Baltimore, and his parents met while teaching at a junior high school in the city.

"As a black child growing up in this country, there was no higher ambition possible than to lead the NAACP," he said. "No one should be concerned about me going anywhere too soon."