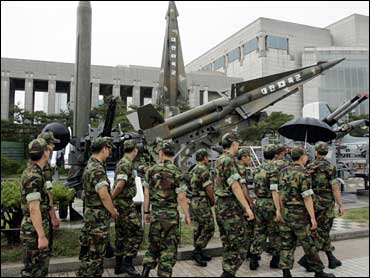 North Korea said Wednesday it wants direct talks with the United States over its apparent plans to test-fire a long-range missile, a day after the country issued a bristling statement in which it declared its right to carry out the launch.

Tensions in the region have soared following intelligence reports that the North was fueling a ballistic missile believed capable of reaching U.S. territory. The United States and Japan have said they could consider sanctions against the impoverished state and push the U.N. Security Council for retaliatory action should the launch go ahead.

North Korea said in comments published Wednesday that its self-imposed moratorium on testing long-range missiles from 1999 no longer applies because it's not in direct dialogue with Washington, suggesting it would hold off on any launch if the U.S. agreed to new talks.

"Some say our missile test launch is a violation of the moratorium, but this is not the case," Han Song Ryol, deputy chief of North Korea's mission to the United Nations, told South Korea's Yonhap news agency in an interview from New York.

"North Korea as a sovereign state has the right to develop, deploy, test fire and export a missile," he said. "We are aware of the U.S. concerns about our missile test-launch. So our position is that we should resolve the issue through negotiations."

The North's official Korean Central News Agency also ran a report Wednesday on U.S. officials urging direct talks between Washington and Pyongyang in regard to the standoff over the North's nuclear weapons program.

Pyongyang has consistently pressed for direct dialogue with the United States, while Washington insists it will only speak to the North at six-nation nuclear talks. The North has refused to return to those nuclear talks since November because of a U.S. crackdown on the country's alleged illicit financial activity.

The new statement from the North came after France and the U.N. secretary-general raised the alarm over what are believed to be the North's preparations for a test of the Taepodong-2, with a range of up to 9,300 miles. Japan and South Korea also pledged to cooperate to stop Pyongyang's apparent plans for a launch.

North Korea's threat of a missile launch is overshadowing Wednesday's U.S.-European Union summit, CBS News correspondent Thalia Assuras reports. As President Bush met with his counterparts, his national security adviser, Stephen Hadley, said "there are a lot of actors in this process."

"A lot of these countries are going to have ideas about what we do, should North Korea ignore the advice of the international community and go forward," Hadley added.

On Tuesday, North Korea asserted its right to test-fire missiles in a statement to Japanese reporters in Pyongyang.

"This issue concerns our autonomy. Nobody has a right to slander that right," the Kyodo News agency quoted North Korean Foreign Ministry official Ri Pyong Dok as saying.

"The North Koreans can try to make it seem as if their position is reasonable. Unfortunately we're stuck in this position with both sides, entrenched in their positions," Michael O'Hanlon of the Brookings Institution told CBS News' The Early Show.

"They may test because it would not be as serious as, say, detonating a nuclear weapon," O'Hanlon added.

Kyodo also quoted Ri as saying the North is not bound by the joint declaration at international nuclear disarmament talks last year or a missile moratorium agreed to by Tokyo and Pyongyang in 2002. North Korean leader Kim Jong Il reaffirmed the moratorium, in place in practice since 1999, in 2004.

Ri told reporters his remarks represented Pyongyang's official line on the matter, but refused to comment on whether the North would push ahead with the missile test, saying it was inappropriate for a diplomat to give further information, Kyodo said.

A pro-North Korean newspaper in Japan, Choson Sinbo, said Wednesday the launch of what it called a satellite could take place "anytime, which can be in a month or in a year." Over the weekend, Kyodo reported that North Korea plans to disguise the missile test as an attempt to put a satellite into orbit, as it did with the 1998 missile launch.

The first sign of a North Korean launch would come from an infrared satellite that would detect the heat of the missile's rocket plume as it lifted off the pad, CBS News national security correspondent David Martin reports. As the missile gained altitude, it would be picked up by the radar of an Aegis cruiser and then by a giant radar based in Alaska.

Within three or four minutes, the radars would have collected enough data to compute the trajectory of the missile and answer the question of where is it going to land, Martin reports.

The international campaign to block the launch widened Tuesday, with the French government and U.N. Secretary-General Kofi Annan calling for a halt to test preparations.

"I hope that the leaders of North Korea will listen to and hear what the world is saying. We are all worried," said Annan, who was in Paris. He called for all parties in the standoff to avoid an escalation of tensions.

"We hope that under the current circumstances, relevant parties can do more in the interest of regional stability and peace," said Foreign Ministry spokeswoman Jiang Yu.

"With North Korea calling for negotiations, the pressure is on all sides to find a diplomatic resolution that gets the government of Pyongyang back to the six-party talks," said CBS News foreign affairs analyst Pamela Falk, "particularly because all six nations involved know that any tough action will encounter resistance from China if the issue does reach the U.N. Security Council."

"Because North Korea withdrew from the Non-Proliferation Treaty three years ago, much of the information that has been reported is not confirmed, and North Korea is aware that if the U.S. intercepts a missile, the crisis escalates considerably," added Falk.

Information on the test preparation remained scant and contradictory Tuesday. Especially unclear is whether Pyongyang has completed injecting fuel into the missile, a move some experts consider irreversible and a clear sign the country intends to launch.

South Korean Foreign Minister Ban Ki-moon said it appeared some rockets had been assembled, but the North's intentions were unclear. There were no reports of a launch by Tuesday evening, and the North is considered unlikely to launch at nighttime.

Amid the rising tensions, the United States staged war games near Guam in the western Pacific with 22,000 troops and three aircraft carriers. Commanders said the maneuvers were not aimed at any particular country.

The test fears have been especially high in Japan, a firm U.S. ally with no diplomatic relations with Pyongyang. The two countries are at odds over the North's abduction of Japanese citizens, Pyongyang's nuclear weapons development and wartime grievances.

The North's test of a long-range missile in 1998 shocked Japan and prompted it to accelerate work with Washington on a joint missile defense system.

Washington also kept up the pressure on Pyongyang. The U.S. ambassador to South Korea conveyed the Bush administration's concerns to former South Korean President Kim Dae-jung, who was to meet North Korean leader Kim Jong Il next week, but postponed his trip to the North on Wednesday. The "trip has become difficult," said his aide, Jeong Se-hyun.