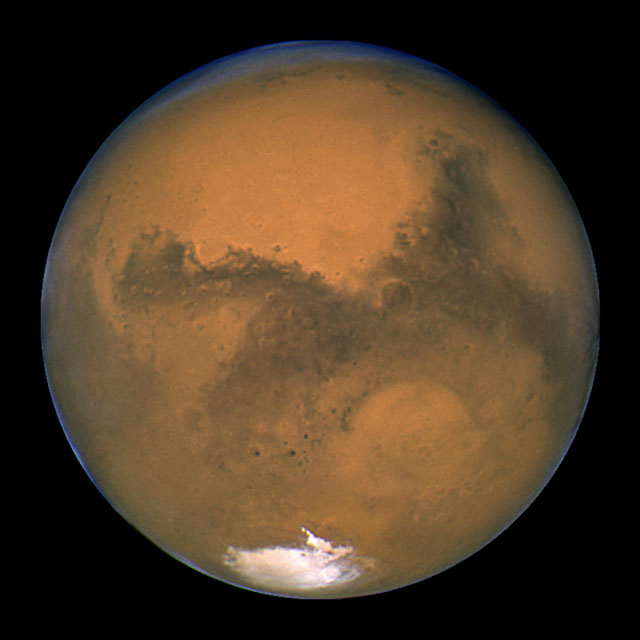 Massive cloud-like plumes on Mars reaching more than 150 miles into the atmosphere have scientists stumped because nothing of this size above the Red Planet has ever been seen.

Identified on two occasions in 2012 by amateur astronomers, the plumes lasted about 10 days and were seen rising to altitudes of over 250 km (155 miles) over the same region of Mars. By comparison, similar plumes recorded above Mars by the Hubble Space Telescope between 1995 and 1999, and of databases of amateur images spanning 2001 to 2014, have not exceeded 100 km (62 miles).

"At about 250 km, the division between the atmosphere and outer space is very thin, so the reported plumes are extremely unexpected," says Agustin Sanchez-Lavega of the Universidad del País Vasco in Spain, lead author of the paper reporting the results in the journal Nature.

Scientists are now working on determining the makeup and cause of the plumes, using the Hubble data in combination with the images taken by amateurs. The announced discovery comes just weeks after NASA's Maven Spacecraft arrived to study Mars' upper atmosphere.

"One idea we've discussed is that the features are caused by a reflective cloud of water-ice, carbon dioxide-ice or dust particles, but this would require exceptional deviations from standard atmospheric circulation models to explain cloud formations at such high altitudes," Agustin said, adding that it doesn't fully explain the enormous size of the clouds.

Agustin said the clouds could also be related to what are called auroral emissions, which involve charged particles from an area of space controlled by the planet's magnetic field or magnetosphere. But writing in Nature, Augustin and his colleagues said this scenario would be unlikely since it would require "an exceptional influx of energetic particles over days, although solar activity in March 2012 was not unusually high."

"Indeed, auroras have been previously observed at these locations, linked to a known region on the surface where there is a large anomaly in the crustal magnetic field," adds Antonio Garcia Munoz, a research fellow at the European Space Research and Technology Centre and co-author of the study.