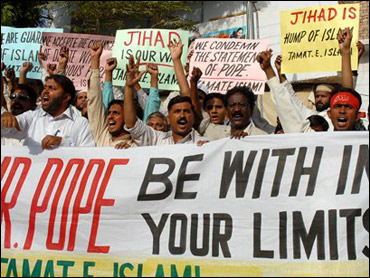 Muslims around the world expressed outrage Friday over Pope Benedict XVI's comments on Islam, with Turkey's ruling party accusing him of trying to revive the spirit of the Crusades and scores taking to the streets in protest.

Pakistan's parliament unanimously condemned the pope, and the Foreign Ministry summoned the Vatican's ambassador to express regret over the remarks.

Benedict quoted from a book recounting a conversation between 14th-century Byzantine Christian Emperor Manuel Paleologos II and a Persian scholar on the truths of Christianity and Islam.

"The emperor comes to speak about the issue of jihad, holy war," the pope said. "He said, I quote, 'Show me just what Muhammad brought that was new, and there you will find things only evil and inhuman, such as his command to spread by the sword the faith he preached."'

The Vatican said the pope did not intend the remarks — made in Germany on Tuesday during an address at a university — to be offensive.

Benedict did not explicitly agree with the statement; nor did he repudiate it.

A Vatican official urged Islamic scholars to re-read the pope's address. Monsignor Felix Machado, who works to improve inter-religious dialogue, said it is clear the pope's address cannot be considered an attack on Islam, but rather an effort at dialogue because Benedict stressed the value of humanity's religious cultures and among them gave an important place to Islam, reports CBS News correspondent Sabina Castelfranco from Rome.

The comments raised tensions ahead of his planned visit to Turkey in November — his first pilgrimage to a Muslim country.

Salih Kapusuz, a deputy leader of Turkish Prime Minister Recep Tayyip Erdogan's party, said Benedict's remarks were either "the result of pitiful ignorance" about Islam and its prophet, or a deliberate distortion.

"He has a dark mentality that comes from the darkness of the Middle Ages. He is a poor thing that has not benefited from the spirit of reform in the Christian world," Kapusuz was quoted as saying by the state-owned Anatolia news agency. "It looks like an effort to revive the mentality of the Crusades."

"The pope has thrown gasoline onto the fire ... in a world where the risk of a clash between religions is high," said Haluk Koc, deputy head of the Republican People's Party, as a small group of protesters left a black wreath in front of the Vatican's embassy in Ankara.

"We do not accept the apology through Vatican channels ... and ask him (Benedict) to offer a personal apology — not through his officials — to Muslims for this false reading (of Islam)," Grand Ayatollah Mohammed Hussein Fadlallah told worshippers.

After Benedict returned to Italy on Thursday, Vatican spokesman the Rev. Federico Lombardi said, "It certainly wasn't the intention of the pope to carry out a deep examination of jihad (holy war) and on Muslim thought on it, much less to offend the sensibility of Muslim believers."

Lombardi insisted the pope respects Islam. Benedict wants to "cultivate an attitude of respect and dialogue toward the other religions and cultures, obviously also toward Islam," he said.

Turkey's top Islamic cleric, Ali Bardakoglu, said Lombardi's comments were not enough. "The pope himself should stand at the dais and say 'I take it all back, I was misunderstood' and apologize in order to contribute to world peace," he said.

In another development, the pope appointed Archbishop Dominique Mamberti, a French prelate with experience in the Muslim world, as the Vatican's new foreign minister.

Pakistan's parliament unanimously adopted a resolution condemning the pope for making what it called "derogatory" comments about Islam and the Foreign Ministry summoned the Vatican ambassador.

The pope's words were "deeply disturbing for Muslims all over the world, and had caused great hurt and anguish," the Foreign Ministry said.

The Vatican's envoy "regretted the hurt caused to Muslims and said that the media had totally misconstrued certain historical quotes that the Pope used in his lecture," the statement said.

Palestinian Prime Minister Ismail Haniyeh, of the Islamic Hamas group, said the pontiff had offended Muslims everywhere and called on him to reconsider his statement. He said there would be organized protests later in the day "to express Palestinian anger."

In Iraq's Shiite Muslim-stronghold of Kufa, Sheik Salah al-Ubaidi criticized the pope during Friday prayers, saying his remarks were a second assault on Islam.

"Last year and in the same month the Danish cartoon assaulted Islam," he said, referring to a Danish newspaper's publication of caricatures of the Prophet Muhammad, which triggered outrage in the Muslim world.

Indonesia, which has more Muslims than any other in the world, had no immediate response to the pope's comments, but religious groups were quick to protest, condemning the words as insensitive and damaging.

"A respected religious leader like the pope should not say such things, especially as nations across the globe are struggling to find ways to bridge differences between faiths and build understanding," said Ma'ruf Amin, a member of Indonesia Council of Clerics, the country's highest Islamic body.

The head of Britain's largest Muslim body said it was disturbed by the pope's use of a 14th century passage. The Muslim Council, which represents 400 groups in Britain, said the emperor's views were "ill-informed and frankly bigoted."

"One would expect a religious leader such as the pope to act and speak with responsibility and repudiate the Byzantine emperor's views in the interests of truth and harmonious relations between the followers of Islam and Catholicism," said Muhammad Abdul Bari, the council's secretary-general.

Later, he delivered a scathing sermon in which he denounced the remarks. "We have heard about your extremism and hate for Arabs and Muslims. Now that you have dropped the mask from your face we see its ugliness and extremist nature," he said.

In Cairo, Egypt, about 100 demonstrators gathered in an anti-Vatican protest outside the al-Azhar mosque, chanting "Oh Crusaders, oh cowards! Down with the pope!"

Dozens of lawyers in Indian-controlled Kashmir also protested, while two separatist leaders were placed under house arrest as they were planning to lead demonstrations.

Benedict, who has made the fight against growing secularism in Western society a theme of his pontificate, is expected to visit Turkey in late November. He was invited by the staunchly secularist Turkish President Ahmet Necdet Sezer, who said the invitation was part of an effort to strengthen dialogue between religions.