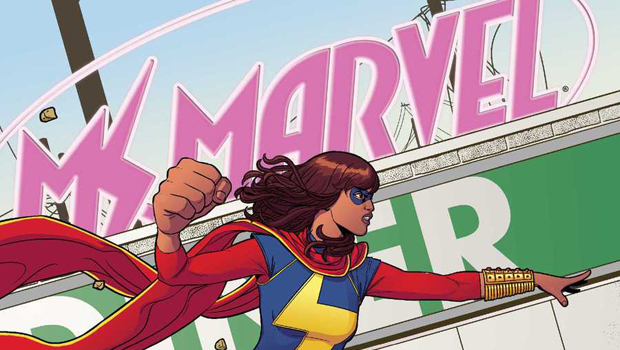 NEW YORK -- The universe of superhero comics is populated by outcasts -- those who don't fit in, but who protect the world anyway.

But there's never been a comic superhero quite like Ms. Marvel. Kamala Khan is just an average teen from Jersey City, who happens to have shape-shifting abilities. She also happens to be Muslim.

To tell that story, Amanat drew on her own childhood as a Muslim growing up in New Jersey.

"I had one instance where right after the first World Trade Center bombing, this kid came up to me in class and was like 'Hey, can you tell your people to stop attacking us?'" Amanat recalls. "It was the first moment where I realized I was 'the other' and I was not included like everyone else."

She found solace in comic books like the X-Men, which features a band of mutants who do good in the face of prejudice.

In the first issue of Ms. Marvel, a nod to an earlier series of the same name, Kamala Khan shape-shifts into a blonde, blue-eyed hero before her father convinces her that she's perfect as she really is.

It's a story that resonated with readers everywhere. That issue went through an unprecedented seven printings and was a New York Times best-seller with over 20,000 copies. It also dealt with Kamala's teen angst with humor and sensitivity.

"The first page of the comic is her smelling a B.L.T. in the local convenience store," Amanat says. "Bacon is forbidden is Islam and she's a Muslim. It's a moment where you are trying to be something you're not."

"I think that Marvel is representing this character at a time where we have some divisive political rhetoric," Gray says. "I think that it shows that, you know, we can sort of embrace our diversity and not sort of be turned off by it."

A sign of the character's importance to Marvel: The most recent issue of the franchise series The Avengers features Kamala Khan front and center. Amanat says their intention was never political.

"We went in to try to tell a unique story," she says. "But I think with that comes the realization of the impact that Ms. Marvel can have -- relaying to the rest of the world of who Muslims are and who Muslims can be, but really about who a good person is."

In these stories, Marvel presents diversity as struggle and strength. Its corporate motto could well be "With great power comes great responsibility."