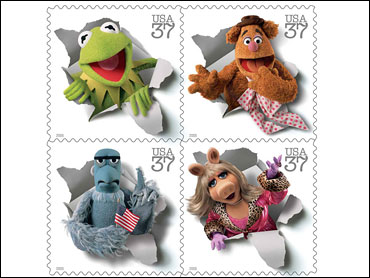 Most frogs settle for lily pads. Kermit the Frog has hopped onto a U.S. postage stamp.

The green leader of the beloved Muppets troupe was on hand Wednesday for a first-day issue ceremony featuring 11 postage stamps honoring the Muppets and their late creator, Jim Henson, at the Academy of Television Arts & Sciences in suburban North Hollywood.

The 37-cent stamps are being released nationally on Thursday.

"On behalf of the Muppets, it is a great honor to be featured on our own set of stamps," Kermit said at the ceremony, through a human intermediary.

Henson, Kermit, Miss Piggy, the Swedish Chef, and Dr. Bunson Honeydew and his assistant Beaker are among the puppets honored in the Postal Service set.

"I love the design! I was a huge fan of the Muppet Show when I was a kid. I can't wait to use these stamps," said one member of the Virtual Stamp Club.

"These are great! The photo and stamp of Hensen is a great idea," said another.

"The Postal Service showed a great deal of cleverness in designing these stamps, but the best parts may not be on the stamps themselves," says CBSNews.com stamp expert Lloyd de Vries. "Take a look at the poignant picture surround the stamps: Jim Henson sitting on the floor, chatting with Kermit. And on the back, there are cute messages from each of the characters."

Kermit and his friends aren't the first puppets to make it onto postage stamps. Charlie McCarthy managed the feat in 1991, along with ventriloquist Edgar Bergen.

It's been 50 years since Kermit the Frog's television debut on Henson's 1955 show, "Sam and Friends." Birthday events include a 15-month, 50-stop world tour that begins next month and includes a run with the bulls in Pamplona, Spain.