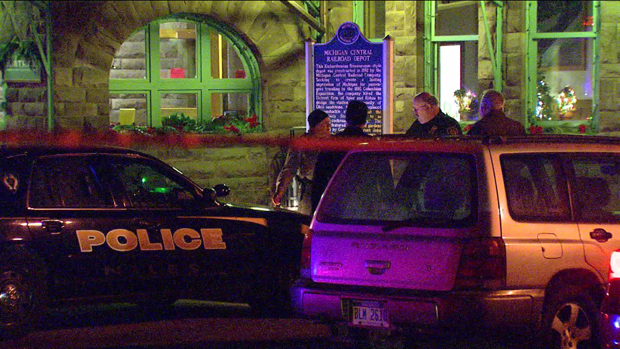 NILES, Mich. -- Police say a suspect is in custody after four people were stabbed Friday evening on an Amtrak train near the Michigan-Indiana border.

The victims, one woman and three men, were taken to local hospitals, CBS affiliate WSBT in South Bend, Indiana reported. One of the victims is an Amtrak conductor, according to Niles Police. Another man is in serious condition with stab wounds to the chest.

An Amtrak spokeswoman said the train was traveling between Chicago and Port Huron, Michigan.

Police said the suspect, whose name was not released, is a 44-year-old man from Saginaw, Michigan who boarded the train in Chicago. Witnesses told WSBT the man was acting erratically before the incident, which took place while the train was stopped at the Niles train station.

"I heard somebody screaming and yelling just loud," passenger Caitlin Cipri said. "I look up and there's an African American gentleman standing over someone who's sitting down in one of the first seats in the car and I see him have his fist up and then bring it down."

Passenger Chris Maynard told CBS News the stabbing happened in the train car next to his. He saw police use a stun gun to subdue the suspect.

Maynard saw two victims being taken from the train on stretchers and two others who were able to walk off the train without assistance.