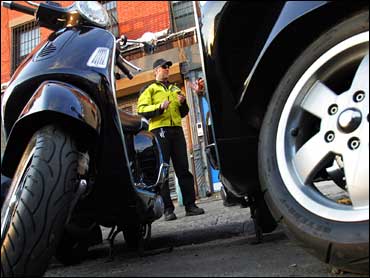 Joan Kohler is not a typical new scooter customer.

But the 51-year-old restaurant owner bought a candy-apple red Honda last week as worries about the price of gas overrode any trepidation about learning to drive it.

With the average price of gas closing in on $4 a gallon, many cash-strapped motorists are turning to fuel-stingy motor scooters and smaller motorcycles. Dealers across the nation report brisk sales this spring, particularly for those that get from 75-120 miles per gallon.

"Ninety-five percent of those who come in mention high gas prices," said Lonnie Trujillo, sales manager for Vespa of California at Sherman Oaks, Calif. "Even though we're in southern California and have year-round riding weather, April sales were phenomenal," he added.

Sales of name-brand scooters such as Honda, Yamaha, Vespa and Suzuki rose 24 percent in the first quarter of the year, said Mike Mount, spokesman for the Motorcycle Industry Council trade group - noting that it's not exactly a hot sales period because of cool weather in much of the nation.

Many lesser-known scooters from China, Taiwan and South Korea also are sold in the U.S., but Mount said those sales figures are not readily available.

"We believe, anecdotally, that fuel prices are definitely having an effect on scooter sales," he said. "It seems likely that that's playing into scooter sales this quarter, as well."

Ross Petersen, a motorcycle and scooter dealer in South Dakota's capital, Pierre, said scooter and medium-sized motorcycle sales are propelled by gas prices. Even people who don't fit the biker mode are buying, he said.

"We're selling to people who we normally wouldn't get into our shop," Petersen said. "We're getting people who have no intention of ever moving up to a bigger motorcycle like a Harley-Davidson."

Within a day of buying her Honda from Petersen Motors, Kohler had 35 miles on her scooter. She said the price of gas was a major consideration, even though her daily commute is just a few miles.

"One-hundred miles to the gallon is great," she said. "I don't do a lot of driving. It's just mainly going to work and back. And I thought, it can't be that difficult to drive."

Gingerly edging to a stop on her driveway, she said her husband worried about her safety, and so she promised to be careful.

"My family was so concerned that I'm going to get killed that I went out and got a mesh lime-green vest with reflective tape, and if other drivers can't see me, they're blind," Kohler said.

Johnny Scheff of Motoworks in Chicago, which sells Vespas, said high gas prices are prompting consumers to find alternative means of transportation. Scooters can pay for themselves in fuel savings over one to three years, he said.

"April was a terrible weather month in Chicago, and the things were just flying out the door," he said.

At Vespa SoHo in Manhattan, the largest Vespa dealer in the country, owner Zach Schieffelin said scooter sales also are being propelled by New Yorkers fed up with commuting on the subways.

"We are starting to see the big uptick we were expecting, and it's all starting to boom now," said Schieffelin. "All of us who ride on a regular basis are having people stop us and ask what kind of fuel economy we get."

But the boom in sales for smaller scooters isn't transferring through to bigger models. Mount, the trade group spokesman, said sales of small and medium-sized motorcycles rose 7.5 percent in the first quarter, but sales of larger, more-expensive motorcycles were down 11 percent.

The Milwaukee-based company is seeing sales erode as its customers pull back on spending amid the struggling overall economy. Sales fell 12.8 percent in the U.S. in the most recent quarter, and the company announced plans last month to cut 8 percent of its work force and trim shipments.

But the fact that many larger motorcycles can get up to 50-60 miles per gallon may be an important factor in those sales this year, Mount said. Sales of biker accessories, apparel and parts also are strong, he added - another possible indication that more people are driving motorcycles to save on fuel costs.

"It tells us, more people are riding more miles," he said.

Petersen, who sells Harley-Davidsons, said most who buy those motorcycles are not fueled by high gas prices.

"Even when things are bad, some people still buy their toys."

It's about to get more expensive to take out federal student loans
Thanks for reading CBS NEWS.
Create your free account or log in
for more features.
View CBS News In
CBS News App Open
Chrome Safari Continue
Be the first to know
Get browser notifications for breaking news, live events, and exclusive reporting.