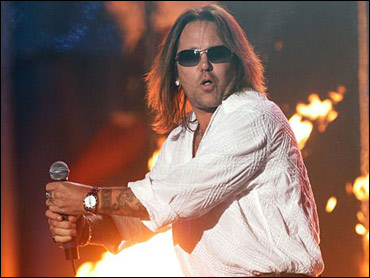 Motley Crue is taking on NBC.

The network banned the band for using an obscenity on the "Tonight Show" on New Year's Eve. In a federal lawsuit filed in Los Angeles, Motley Crue claims the ban violates the group's free speech rights and has hurt its sales.

The band also asserts that the ban was an effort to mollify the Federal Communications Commission, which has taken a hardline approach to the use of on-air obscenities.

Details of the lawsuit were reported by the New York Times.

The remark was heard by viewers in the East but was edited out before a taped version of the show aired on the West Coast.

Leno normally tapes his show for broadcast later in the evening but does a live version for New Year's Eve. He had never a problem with profanities before, although the word has slipped out from time to time on other programs.

"We meant no harm, but it feels that we're being singled out unfairly," Nikki Sixx, the band's bassist, told the Times. "This is a discrimination issue, pure and simple."

NBC issued the following statement: "To ensure compliance with its broadcast standards, NBC has the right to decide not to invite back guests who violate those standards and use an expletive during a live entertainment program. The lawsuit Motley Crue has filed against us is meritless."

The FCC, in a ruling issued last year, said the F-word should never be used on over-the-air radio or television programs.