Why aren't banks playing the mortgage modification game? We've been told that lenders prefer to modify and/or restructure loans, rather than enter into the costly and time consuming foreclosure process. At least that was the thought when the government rolled out the Home Affordable Modification Plan ("HAMP").

Despite paying up to $1,500 for each modification, plus $1,000 a year for up to 3 years for each borrower who remains current, the program is stuck. 650,000 homeowners have been given trial modifications, but only a fraction of those have become permanent. What's HAMPering progress on the program? 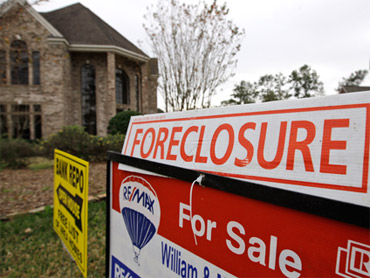 (AP Photo/David J. Phillip)
Maybe some banks think that they're going to get bailed out by the eventual recovery of the housing market; the plan requires a vast staff with a high skill level to properly carry it out; it's too cumbersome and loaded with reams of paperwork; and maybe the key issue is that many lenders fear that even those borrowers who restructure loans will ultimately re-default, so why get involved at all?

With nearly a quarter of homeowners under water on their mortgages, the government wants to apply more pressure, including possible financial penalties and the more humorous suggestion, shaming banks into action. Ummm, how well does shaming work in an industry that clearly has none in the first place?

More on MoneyWatch:
•What's Next for Real Estate?
•New Analysis: Employment Picking Up?
•Holiday Shopping: 5 Things to Know
•Save on Gas: 9 Ways To Drive Smarter
•Don't Lose Your Cool Over Dubai
•Which College Students Drink Most?
•Food Stamps Now Help 1 in 8 Americans