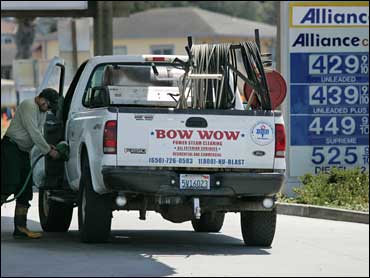 Also, "the program is also projected to achieve reductions of 900 million metric tons of greenhouse gas emissions under the life of the program. That is equivalent to taking 177 million cars off the road or shutting down 194 coal plants," said the senior administration official.

The new rules are expected to bump up auto prices an average of $1,300 per vehicle.

"'What's significant about the announcement is it launches a new beginning, an era of cooperation,' said Dave McCurdy, president and CEO of the Alliance of Automobile Manufacturers, the group that represents Detroit's Big Three automakers, Toyota, Daimler and six other automakers. 'This is doable,' McCurdy said, while acknowledging there would be significant costs. Congressional leaders also are working to pair the new requirements with billions more in aid for struggling automakers."

Meantime, Michigan Gov. Granholm, who's reportedly on Mr. Obama's short list for the Supreme Court, may meet separately with the president about the Court's vacancy. White House Press Secretary Robert Gibbs demurred when asked about the prospect of a meeting, only offering that the "primary objective" of her visit was for the auto announcement. 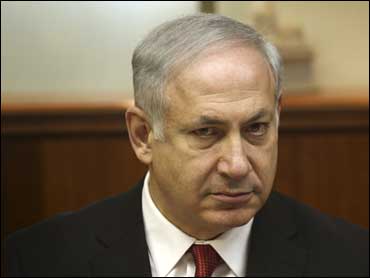 (AP Photo/Uriel Sinai, Pool)
NETANYAHU: A day after meeting with President Obama, Israeli Prime Minister Benjamin Netanyahu heads to Capitol Hill, where he's expected to be questioned about his refusal to endorse an independent Palestinian state.

"Obama has endorsed the creation of a Palestinian state alongside Israel as the best way to establish peace between it and other Arab nations, only two of which currently recognize the Jewish state," reports the Washington Post's Scott Wilson. "After two hours of talks at the White House, Obama said Israel, the Palestinians and the Arab states must do more to achieve regional peace, making clear that 'when it comes to my policies towards Israel and the Middle East that Israel's security is paramount.' Netanyahu, who took office in March at the head of a fragile and sharply hawkish governing coalition, declined to endorse Obama's call for a two-state solution to the conflict. He made clear that his interest in checking Iran's nuclear ambitions is far greater than his desire to revive dormant peace negotiations with a divided Palestinian leadership. Netanyahu said he wanted 'to make clear we do not want to govern the Palestinians,' but he did not mention a Palestinian state as the ultimate goal of talks."

"Addressing reporters after their talks, the two leaders exchanged praise and described shared goals. But it was clear after the four-hour meeting that they remained far apart on key issues," adds the Los Angeles Times' Paul Richter. "For instance, Obama emphasized that Israel must halt growth of Jewish settlements in the West Bank in order to reach a peace accord. But Netanyahu said nothing on the subject in an exchange with reporters in the Oval Office. Speaking later with Israeli journalists, Netanyahu indicated that Israeli action on settlements would depend on Palestinian cooperation in other areas, the Ynet news organization in Israel reported. Obama, whom Israel has been pressing to set a deadline for his outreach initiative to Iran, said for the first time that the administration would try to decide by the end of the year whether to continue the effort. By then, he said, 'we should have some sense of whether these discussions are starting to yield serious benefits.'"

"Still, Obama insisted that is only a general timetable. 'That doesn't mean every issue would be resolved at that point,' he said. 'I don't want to set an artificial deadline.' The Israeli and U.S. governments allege Iran is trying to develop nuclear weapons; Tehran insists its nuclear effort is a civilian energy program. After the meeting Netanyahu appeared to soften his insistence that the issue of Iran's nuclear program take precedence over talks with the Palestinians. He said the two matters should be tackled at the same time, 'in parallel.' Obama, however, continued to say a Palestinian settlement must take precedence. Settling that, he said, could help defuse any possible Iranian threat." 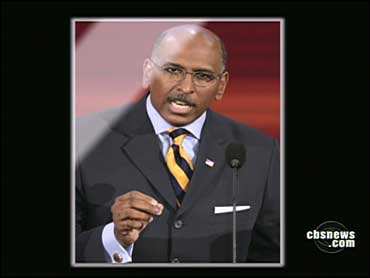 (CBS)
GOP'S FUTURE: Embattled Republican National Committee Chairman Michael Steele addresses a special meeting of the RNC this afternoon at 1pm where he attempts to re-focus his party after a disastrous 2008 and a stumbling beginning to 2009.

"The era of apologizing for Republican mistakes of the past is now officially over. It is done… We have turned the page, we have turned the corner. No more looking in the review mirror. From this point forward, we will focus all of our energies on winning the future," Steele will tell RNC members, according to speech excerpts obtained by CBS News.

"As conservatives we must stop acting like we don't really believe in our principles. Too often we act as if we are scared to apply our timeless principles to today's problems and challenges… For Reagan's conservatism to take root in the next generation we must offer genuine solutions that are relevant to THIS age," he'll say.

"When Michael S. Steele took over as chairman of the Republican National Committee earlier this year, he brought along longtime personal assistant Belinda Cook and gave her a salary nearly three times what her predecessor made. Mrs. Cook's son, Lee, also landed an RNC job. Mr. Steele hired another family friend, Angela Sailor, to be the party's outreach director at a salary of $180,000, more than double her predecessor's compensation, though new responsibilities have been added to the job, according to a high-ranking RNC official and Federal Election Commission (FEC) filings. Mr. Steele's early record and personnel decisions figure to be hot topics at a special meeting of Republican state party chairmen Tuesday and Wednesday at National Harbor in Washington's Maryland suburbs. His hiring of friends and the salaries he is paying them already helped to instigate a struggle over who controls the party's purse strings, one that forced the new party chairman to relinquish some control to elected RNC members," Hallow reports.

"''These salaries we hear about are way out of line for what staff should be paid for working for a political party, which most of us think of as a cause,' said Hawaii Republican Party Chairman Willis Lee. 'And if certain staff at the national committee are making that much, then the public understandably might think they are examples of cronyism.' ... Mr. Steele could face other headaches at the special meeting as well, including a vote on a resolution he has publicly opposed: to ask the Democratic Party to rename itself "the Democrat Socialist Party." Two other less contentious resolutions - praising Republican lawmakers for opposing pet federal projects, government bailouts and heavy federal spending - also will be voted on. But many complaints will focus on staff compensation. Some party officials have said that the salaries appear generous compared with those paid for similar positions under previous RNC head Robert M. 'Mike' Duncan."

CALIFORNIA SPECIAL ELECTION: "The battle over six state budget propositions on today's ballot sputtered to a close Monday with a burst of low-profile campaigning that belied the gravity of California's fiscal crisis," write the Los Angeles Times' Michael Finnegan and Michael Rothfeld. "Gov. Arnold Schwarzenegger, whose legacy will be shaped in part by the election's results, made a final pitch to voters before leaving the state ahead of the results. The governor is scheduled to join President Obama at the White House today for an announcement on auto emission rules. His absence in the face of widely forecast defeat drew mockery from his foes. Tonight's results will gauge what polls suggest is voter fury over the failure of the Republican governor and the Democratic-controlled Legislature to balance the state's books. As Californians struggle with joblessness, home foreclosures and sharp losses in the stock market, the state has raised taxes, cut spending and borrowed to fix a $42-billion shortfall -- and still remains more than $15 billion shy of a balanced budget. If voters reject Propositions 1C, 1D and 1E -- the three chief money-raisers on Tuesday's special election ballot -- the shortfall will grow to $21 billion. Despite the high stakes, voter turnout is expected to be sparse for an election that also includes a fiercely contested runoff for Los Angeles city attorney and races to fill vacancies in the 32nd Congressional and 26th state Senate districts."

"The governor has ... been leading the fight to pass six ballot measures that would help address the state's budget woes. Polls have shown that five of the six are in deep trouble with voters, particularly Proposition 1C, which would allow the state to borrow $5 billion from future California Lottery revenues," adds the Sacramento Bee's Kevin Yamamura.

Then at 3:30, the president will deliver remarks at a ceremony honoring National Small Business Award winners.

Following that, Mr. Obama meets with Defense Secretary Robert Gates and, for the first time since naming him to lead U.S. forces in Afghanistan, Lt. Gen. Stanley McChrystal.

Vice President Biden is meeting with leaders of Bosnia and Herzegovina in Sarajevo today.

And White House senior adviser David Axelrod makes a trip to Capitol Hill to speak to the House Democratic Caucus.

The Hill's Mike Soraghan, "Dems change the subject from waterboarding"