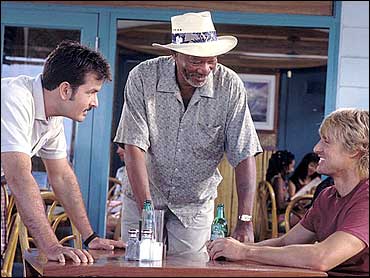 In an incredibly long and diverse career, Morgan Freeman has played the president of the United States and God as well as a chauffeur and a pimp. In his latest film, "The Big Bounce," he plays a judge who takes a small-time crook under his wing.

Freeman discussed his new movie, which is based on the novel by crime writer Elmore Leonard ("Get Shorty," "Out Of Sight," "Jackie Brown"), on Friday's The Early Show.

"It was a fairly good role to play. It's not like heavy drama that I'm getting to be known for," says Freeman.

The actor says working in Hawaii and acting with a strong cast, including Charlie Sheen, Owen Wilson Vinnie Jones, Sara Forster and Gary Sinise, made making the movie fun.

"The Big Bounce" is just one of many movies Freeman has worked on in his long career. Recently, he received a lifetime achievement award from the National Board of Review for his work, which he says was gratifying.

"Luckily, I looked at it again. It doesn't say life achievement," Freeman says. "It says career achievement, which I can interpret to mean career-to-date achievement.

Freeman says he would like to accomplish more in his life. He is looking forward to producing and telling more diverse stories in Hollywood.

"There's American history that has neglected a lot of Americans," he says. "The country wasn't built by one group of people. It was built by a diverse group of people. And we've left them out. So there's plenty of room to go back and get them and include them. "