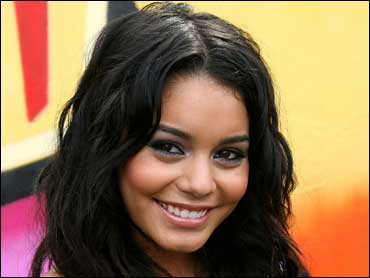 "High School Musical" star Vanessa Hudgens is getting a lot of clicks on the Internet again -- and it's not for pictures for her hit movie, but images that were leaked on the Internet of the Disney actress in compromising positions that aren't so lady-like.

Once again Hudgens' wholesome image created onscreen is put to the test as she was trying to recover from the first nude photo incident that surfaced on the Internet last week.

The first photo that surfaced on the Internet showed the 18-year-old actress smiling as she posed naked and in underwear in a bedroom with a red curtain behind her.

The sources of the Internet leaks have yet to be discovered.

According to the New York Daily News, one of the recent photos shows Hudgens engaged in girl-on-girl kissing and another has her touching a girlfriend's breast.

The humiliated actress backed out of an appearance on Jay Leno's "The Tonight Show" last night, blaming a scheduling conflict.

Despite the star's "lapse in judgment" in posing for racy photos that leaked to the Internet, which is grabbing media attention, The Walt Disney Co. is sticking with Hudgens, who has greatly contributed to the wildly successful "High School Musical" franchise.

Vanessa Hudgens apologized Friday for the photos, which show her smiling as she posed naked and in underwear in a bedroom with a red curtain behind her.

"Vanessa has apologized for what was obviously a lapse in judgment," said Disney Channel spokeswoman Patti McTeague. "We hope she's learned a valuable lesson."

She said negotiations were ongoing to land all the actors for a "High School Musical 3" feature film, including Hudgens.

Hudgens, who played the brainy Gabriella in the first two made-for-cable TV movies, told her fans she was sorry.

"I am embarrassed over this situation and regret having ever taken these photos," she said. "I am thankful for the support of my family and friends."

Hudgens' publicist, Jill Fritzo, wouldn't say anything about who took the pictures and how they slipped out onto the Internet.

Hudgens is a superstar among the preteen set, and Disney has spun a wide merchandising net around the series with albums and concert tours. She and Efron reportedly date in real life, making them big attractions for celebrity magazines.

The films' wholesome nature for a company that has made its name on family-friendly fare for generations is a big part of its success. Parents can relax with their children watching, knowing it won't make for any uncomfortable questions.

Gabriella and Troy coo, they make googly eyes, they barely kiss. Gabriella would doubtlessly blush at the idea of a young actress posing for nude photos.

If Disney executives had cut ties to Hudgens, not wanting the company's name associated with anything not G-rated, they would have run the risk of upsetting a formula that has made the company millions upon millions of dollars.

How would parents explain to the show's young fans that the old Gabriella was being replaced by another actress?

"That's her private life, not her public life. That picture got leaked by somebody who broke a trust with her," said Michele Smith of Westborough, Mass., whose 8-year-old daughter Kathryn is a devoted "High School Musical" fan.

Dropping her from future movies or other "High School Musical" projects would not only be unfair to Hudgens but to fans such as Kathryn, Smith said.

"If Vanessa is not in the movie, my daughter would not be so excited to see it," she said.

Smith said she hopes that Kathryn doesn't hear about the photo but, if she does, she's prepared to talk about it. She'll say that it's something private for Vanessa that shouldn't have been shared.

The best thing for Disney was to do nothing, said Michael Levine, a Hollywood image consultant and author of 18 books.

"What they shouldn't do is make a bigger deal out of it than is necessary," he said. "The picture is not salacious."

Michael Sands, a publicist whose clients have included the divorce attorney for Britney Spears' ex-husband Kevin Federline, said Hudgens should be commended for coming forward quickly and saying it was her pictures.

"She's very talented and this is a big cash cow for Disney," he said.

In an earlier interview with Teen Magazine, the Disney actress commented on her upbringing and compared herself to other Hollywood stars who have been in hot water lately.

"I'm a good kid, Hudgens said. "I've been brought up with very good morals, and I'm not going to go out and do something I don't want other kids to do."

Hudgens said she believes that she's part of a new crop of well-behaved rising stars who are ready to take the place of the hard-partying young Hollywood crowd.

"I love being a role model because, in Hollywood, there aren't a lot of role models to look up to," she says. "The fact that there's a whole bunch of good kids coming out who are now stepping into the limelight, I'm very proud of that."