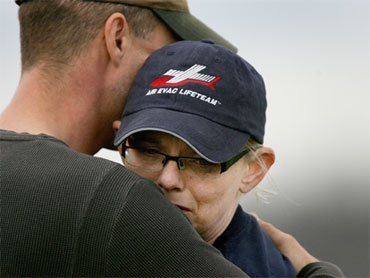 The Pantagraph newspaper in Bloomington, Illinois, says it has sent a letter to Moore and the film's distributor, Lions Gate Entertainment Corp., asking for an apology for using what it said was a doctored front page in his movie.

The paper is seeking $1 in damages.

A scene early in the movie shows newspaper headlines related to the contested 2000 presidential election. It includes a shot of The Pantagraph's Dec. 19, 2001, front page, with the prominent headline, "Latest Florida recount shows Gore won election."

The newspaper says that headline never appeared on that day.

The paper said the headline appeared in a Dec. 5, 2001, edition but was not used on the front page. Instead, it was found in much smaller type above a letter to the editor, which the paper says reflects "only the opinions of the letter writer."

"If (Moore) wants to 'edit' The Pantagraph, he should apply for a copy-editing job," the paper said.

Neither Lions Gate nor Moore were immediately available for comment Sunday.

Meanwhile the film is also kicking up a little dust in the Mideast.

Kuwait, a major U.S. ally in the Persian Gulf, has banned "Fahrenheit" on the grounds that the movie is insulting to the Saudi Arabian royal family and is critical of America's invasion of Iraq, an official said Sunday.

"We have a law that prohibits insulting friendly nations, and ties between Kuwait and Saudi Arabia are special," explains Abdul-Aziz Bou Dastour, cinema and production supervisor at the Information Ministry.

The film, says Dastour, "insulted the Saudi royal family by saying they had common interests with the Bush family and that those interests contradicted with the interests of the American people."

The ministry made the decision in mid-July after the state-owned Kuwait National Cinema Co. asked for the license to show the movie. The company monopolizes cinemas in Kuwait, but all movies must first be sanctioned by government censors.

"Fahrenheit 9/11," which won the top honor at May's Cannes Film Festival, depicts the White House as asleep at the wheel before the Sept. 11, 2001, attacks in New York and Washington. Moore accuses President Bush of fanning fears of future terrorism to win public support for the Iraq war.

The Saudi royal family has taken issue with the movie for claiming that high-ranking Saudi nationals were allowed to flee the United States immediately after the attacks at a time when American airspace had been closed to all commercial traffic.

The 9/11 commission investigating the 2001 terrorist attacks found no evidence that any flights of Saudi nationals took place before the reopening of national airspace on Sept 13.

Kuwait was the launch pad for the war that unseated Iraqi dictator Saddam Hussein, who ordered the invasion of Kuwait 14 years ago. A U.S.-led coalition fought the first Gulf War, which evicted Iraqis after seven months of occupation.

Saudi Arabia, a leading Arab Muslim nation, opened its land and air space to coalition forces that liberated Kuwait, and Kuwaitis are still grateful for that.

The film is already playing elsewhere in the Middle East, including the United Arab Emirates and Lebanon.