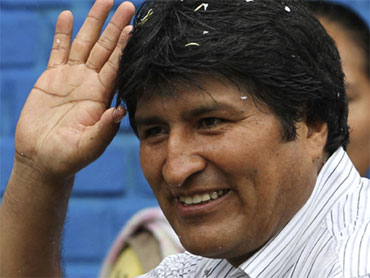 Bolivian President Evo Morales said Tuesday he's inviting activists, scientists and government officials from around the world to an alternative climate conference following the failure of a summit in Copenhagen to produce binding agreements.

The leftist leader said the April 20-22 meeting in Cochabamba will include indigenous peoples, social movements, environmentalists and scientists as well as governments "who want to work with their people."

Morales said the meeting is meant partly to pressure industrialized nations to accept that they have a "climate debt" to poor countries and will work toward an international court on environmental crimes.

Other topics will include a "universal proposal for the rights of mother earth" and the transfer of technology.

Last month's 193-nation climate summit in Copenhagen agreed on creation of a fund to help poor nations but it was vague on how the money will be raised.

Bolivia was one of five countries to block a consensus on accepting the Copenhagen Accord brokered by President Barack Obama, arguing that the deal was done in secret by a small group of countries.

Lacking agreement by all 193 countries, the document was "noted" by the conference, giving it less moral and legal weight than if it had been formally adopted.

In his speech to the assembly and in a press conference during the summit, Morales railed against capitalism and imperialism, which he said spawned the problem of climate change by ignoring the rights of nature and the rights of indigenous peoples.

He denounced industrialized countries for pledging $10 billion a year to help countries meet the challenges of climate change, while spending "trillions to fight unnecessary wars" in Iraq and Afghanistan.

On Tuesday, Morales called the Copenhagen summit "a triumph of the people" because "the presidents came, proposed and went without hearing, but this time they could not impose their declaration."