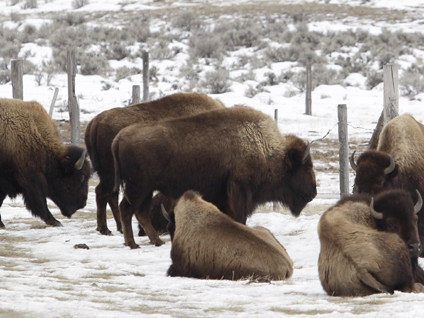 The Democratic governor told The Associated Press that he was worried the shipments could spread the disease brucellosis, now largely confined to Yellowstone's wildlife, to Montana livestock.

Park officials had planned to slaughter potentially hundreds of bison testing positive for exposure to the disease, which causes pregnant animals to prematurely abort their young.

The shipments initially had state backing. And Montana has participated in past slaughters, including one three years ago in which more than 1,400 bison passed through Montana to slaughter.

But Schweitzer said he wants to send a message to federal officials that a new approach is needed to control a bison population that spills out of the park and into Montana every few years.

In the interim, he suggested the park bring in loads of hay to feed 525 bison captured so far this winter after they migrated out of the snow-packed park to lower elevations in search of food.

"More than anything else, this is a direct signal to the Department of Interior in Washington, D.C. to get their hat screwed on right and manage this bison population," Schweitzer said. "Their plan is, when there gets to be a lot of snow, buffalo will go into Montana and then somebody else will have to deal with it."

In blocking the shipments — with an executive order that prohibits Yellowstone bison imports into Montana for 90 days — Schweitzer is treading a fine political line.

On one side are wildlife advocates and conservation groups vehemently opposed to the slaughter. On the other, a ranching industry anxious to protect its cattle from disease.

For years the two sides have deadlocked over the park's estimated 3,700 bison.

Tom Woodbury with the Western Watersheds Project — which has a pending request for a court order to stop the slaughter before the 9th Circuit Court of Appeals — said Schweitzer has effectively put the onus on federal officials to break that impasse.

He noted that many observers have considered the Montana Department of Livestock to be the prime force behind the periodic slaughters of Yellowstone's bison.

"They're the ones that wanted to see those bison shipped to slaughter," he said.