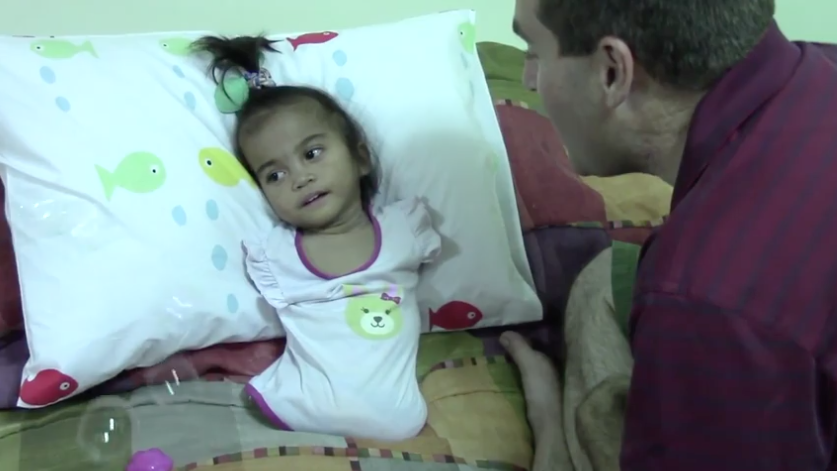 On the one-year anniversary of bringing her 3-year-old daughter, Maria, home from the Philippines, Adrianne Stewart shared a home video of her little girl’s long journey with a message: “Special needs adoption has changed our family forever.”

Then on Friday, she posted it on Facebook, and now her message is spreading across the world as hundreds of thousands of people watch the journey of the little girl who was born without arms and legs.

“When we found our daughter we did not think that we were qualified or prepared enough to parent a child like her, a child born without arms and legs, but we knew that we could love her and that loving her was what mattered most,” Stewart wrote in the post, which has since gone viral on the popular blogging site Love What Matters with more than 700,000 views. “She has given us far more than we will ever give her.”

Though Stewart wasn’t originally planning on sharing Maria’s story with the world, she hopes it will inspire other parents to adopt — international, domestic, special needs or otherwise.

“There are so many kids out there without families and homes,” Stewart told CBS News. “It’s not as hard and difficult as people think it could be.”

Two years ago, Stewart contacted an adoption agency in search of a child in need of a home. She already had three children: two girls, ages 11 and 13, and a boy, age 6, who was also adopted from the Philippines.

The agency sent her a list of children. As she scrolled through dozens of names and photos with her husband, she spotted a 6-month-old girl with round, rosy red cheeks — and she instantly fell in love.

“We knew we had to adopt her,” Stewart said.

It wasn’t until about a year later, October 2015, that the Stewart family finally met their little girl. At the time, they had still only seen one photo of her. But they were determined, and when they picked her up from Chosen Children Village in Cavite, Philippines, they felt an instant connection.

Now, nearly a year and a half after her adoption, the family has finally fallen into a routine. Maria goes to preschool twice a week, she works with physical therapy and speech and occupational therapy trainers once a month, and she also enjoys being a “typical” kid, playing with stuffed animals and listening to ‘80s music.

“She’s very loving,” Stewart said. “She loves her stuffed animals; she makes us feed her little bear before we feed her.”

Stewart admits they took a “leap of faith” with Maria, but their faith paid off.

“We were scared to begin with, not knowing what to expect, but everything has fallen into place,” Stewart said. “It seems like a big thing when you start out, but everything just works out.”

In fact, Stewart says the experience has been so fulfilling and positive, the family plans to adopt a 9-year-old girl with special needs from the Philippines next year.